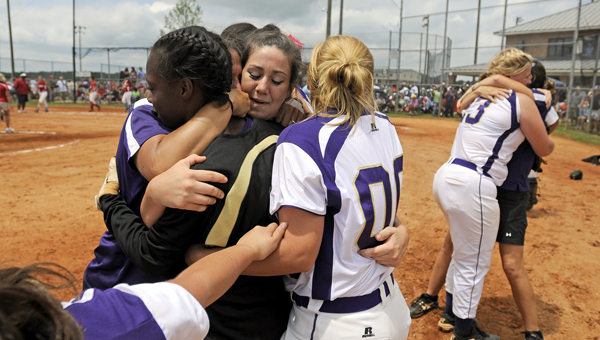 All game long, Horseshoe Bend pitcher Nikki Thompson dominated the Goshen lineup, allowing just one run off of one hit for the first six innings.

Down to their last out, the Eagles got base hits from Sam and Fran Warrick to bring Niyoka Slater to the plate.

The senior was 0-for-3 on the day, with back-to-back strikeouts at the plate and a few miscues in the field.

Frustrated with her performance, Slater was hoping to redeem herself. And with swing of the bat, that is exactly what she did.

Slater took the first pitch of the at-bat to straightaway centerfield to give her team 4-3 lead and in the process advance to the state tournament, next week in Montgomery.

“I knew it was gone as soon as she hit it,” Eagle head coach Dee Hughes said.

“I told her it takes just one crack of the bat to change a game. And on the first pitch she got one the biggest hits of her life.”

The home run was Slater’s second of the tournament, as the Eagles stay in the winner’s bracket. One more win, and Goshen clinches its first sectional championship in over a decade.

“The first thing I thought about when I saw the pitch go over the fence was ‘Yes!’, the senior said. 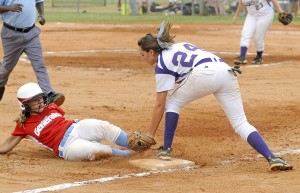 “It was an unbelievable feeling. I went into that at-bat frustrated because of how I played earlier in the game. I was just looking for a way to redeem myself.”

The Eagles finished with three hits in the top of the seventh, while hitting just one in the six innings before.

Shelby Vinson’s RBI double in the third inning was the only hit to that point.

In the pitcher’s circle for Goshen was Alli Warrick. The junior kept her team in the game, prior to the late inning heroics by pitching a complete game, giving up just three runs on nine hits while striking out seven.

“Alli got better as the game went on,” Hughes said. “She pitched great all the way through and was a big reason why we were able to win this game.”