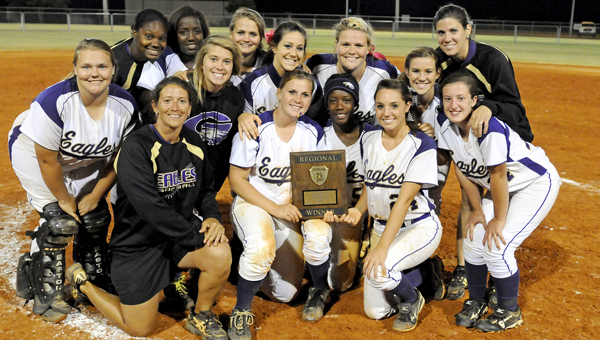 Saturday night will always be remembered as a historic night for the Goshen Eagle softball program.

With its second win of the day over Horseshoe Bend, the Eagles clinched its first ever Southeast Region championship and a No. 1 seed in that state tournament.

“This is by far the biggest win I have ever experienced,” Goshen head coach Dee Hughes said after the 7-0 championship win over the Mustangs. “No doubt bout it.” 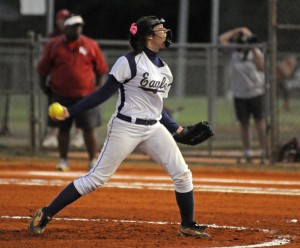 While the Eagles used its offensive firepower to help get it through the first three games of the tournament, it was the pitching of junior Alli Warrick that did most of the damage early on.

Warrick, who was named the tournament MVP, pitched a complete game two-hitter, striking out six along the way.

“We wanted to win this game pretty bad,” she said.

“We want to make history, we wanted to be the first team to win the region and go to state – we wanted to go out with a bang and let people know who we were.”

In four tournament games, Warrick finished with 21 strikeouts, while giving up just three runs off of 12 hits.

Throughout much of her time in the pitching circle, she was working with a lead.

And that was the case in Saturday night’s game, after Niyoka Slater came around to score in the first inning on a Shelby Vinson groundout.

The sixth inning however is when the Eagles blew the game wide open.

Goshen scored five runs in the inning, thanks to RBIs from Kaitlin Thomas, Slater and Rachel Senn.

“Everybody contributed in winning this tournament,” Hughes said after the final game, “and that’s what good teams do.

“If you want to be a good team that has to happen. Our girls were confident coming into this game. They knew this time around things were going to be different.”

It was a year ago in the same regional tournament that Horseshoe Bend ended Goshen’s season.

Now, a year later, the Eagles defeated the Mustangs twice in a 10-hour span. 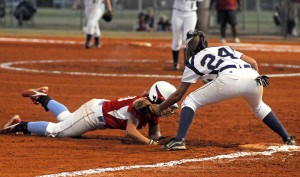 Horseshoe Bend High School's Jessica Harten (20) dives for third base as Goshen High School's Amanda Griggs (24) applies a tag during the sectional championship in Troy, Ala., Saturday, May 14, 2011. Harten was ruled safe on the play. (Messenger Staff Photo/Thomas Graning)

“We remember what it feels like to lose and to watch another team win this,” Hughes said.

“That was something we didn’t want to have to go through again. It’s been a long time coming and this team has made a lot of improvements.”

The Eagles will now advance to the state tournament, which will be held in Montgomery beginning on Thursday morning.