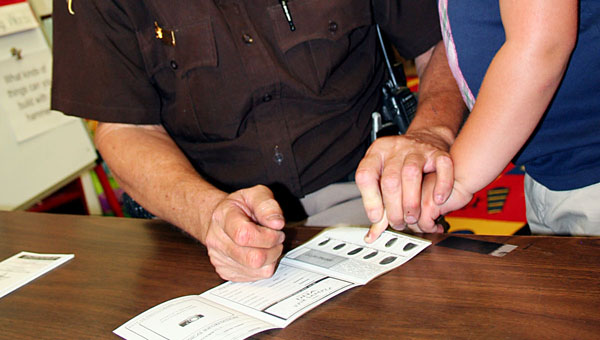 As of Friday noon, every kindergarten student in the county and city schools of Pike County has been fingerprinted

Several years ago, Pike County Sheriff Russell Thomas initiated the Child ID program, which includes fingerprinting all kindergarten students and providing those prints and identification cards to their parents.

Deputy Dennis Riley said between 500 and 600 kindergarten students were fingerprinted this year.

“We offer this service to the kindergarten programs at all schools as a service to the community,” Riley said. “Each student is fingerprinted so that if a kid gets lost or goes missing, there will be a record of identification available to the authorities.”

Even though a thumbprint would be sufficient identification, Riley said all eight fingers and both thumbs are printed.

“Even when we book an individual at the jail, we take five prints off each hand,” he said. “You never know what might happen. A deep cut or burn could keep you from being able to get a good print. So, it’s just a good idea to have a full set of prints.”

A fingerprint is unique to each individual.

“Nobody else has the same fingerprints,” Riley said. “Fingerprints don’t change. They’re with you forever.”

The identification cards are sent home with the student for safekeeping.

“The parents can fill out the personal identifying information that includes things like scars and birthmarks,” Riley said. “These identification cards are useful as long as they are kept dry and safe.”

Riley said the identification cards provided by the Pike County Sheriff’s Department have not been needed and hopes are that none of them ever will.