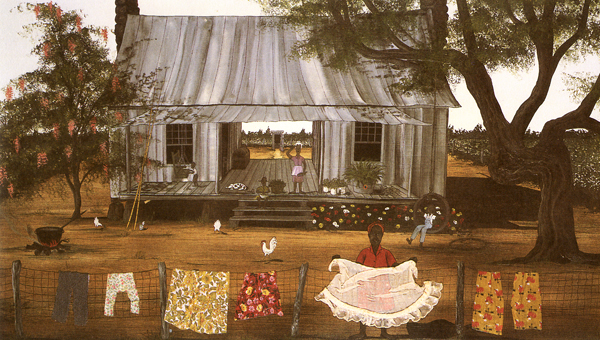 Several works of art by Jean Lake were recently donated to Pioneer Museum.

A treasure chest is a figment of one’s imagination. Usually.

But every now and then one is found.

The treasure chest that has been entrusted to the Pioneer Museum of Alabama was brought into the museum, not in an antiqued trunk, but in several aging boxes.

Jeff Kervin, chair of the museum’s board of directors, said that Degie Lake Stevens came to the museum with a treasure trove of art in tow.

“Degie brought the remaining prints of her mother’s artwork to the museum and offered them to be sold at the museum with most of the proceeds going to the museum,” Kervin said. “Jean Lake had a strong affection for the museum and several of the buildings on the museum grounds were inspiration for her work.”

Stevens donated several boxes of her Lake’s work to the museum. The boxes included limited edition black and white and color prints. Some of them were signed by the artist. Packaged note cards are also among the artwork.

She began painting as a child but had no formal training in art. She worked for the First Farmers and Merchants National Bank in Troy but her avocation was art. Her simple, primitive artwork was shown throughout the Southeast. Lake’s work became extremely popular and won many awards. Much of her work was quickly purchased by collectors of folk art and is in private collections.

Lake was a fun-loving, free spirit talent and was a favorite among the traveling artist circuit. She would often invite her artist friends to her beloved hometown for art shows. After Lake’s death in 1976, friends of Jean Lake approached The Troy Council on the Arts and Humanities to combine local art shows into a big two-day art show, to be held on the grounds of the Pike Pioneer Museum. The art show would showcase the region’s best artists and more importantly, honor Jean Thompson Lake. The first Jean Lake Memorial Art Show was held in 1982.

The annual arts and crafts show has been moved to the downtown square in Troy and has been renamed TroyFest but it continues as a memorial to Lake through the awarding of the annual Jean Lake Memorial Scholarship to an outstanding senior art student.

The artwork of Jean Lake is still exhibited all over the world today. She continues to be recognized as the namesake of the festival and the exclusive annual scholarship. Her contributions to the Troy community and to the primitive art world will never be forgotten.

Jerry Peak, retired director of the Pioneer Museum of Alabama, said the museum is proud to offer the remaining prints of Lake’s artwork and expects many of those who collect her work to take advantage of this last-time opportunity.

The black and white, limited edition prints are $7.50 each and the color prints are $12. The note cards are packaged six to the pack and are priced at $5.

The signed prints have not been priced.

The Jean Lake collection prints will be sold today at the museum’s Butter Churn’ Syrup Soppin’ Saturday event and as long as the prints are available.