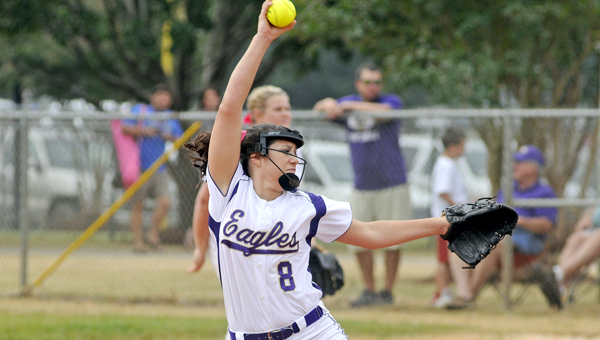 Despite an early wake up call and a cloud-filled morning, the Goshen Eagles were all smiles Friday at the start of the softball sectional tournament.

Like it has done the past two seasons, Goshen cruised through its first day competition, defeating both Reeltown and Choctaw County by the scores of 12-2 and 11-0.

Both games ended in five innings.

“Our girls were just so relaxed and focused and that made a huge difference. They have seen this level of competition – and so they were not stressed at all.”

But even with the convincing wins, Hughes and her players are not satisfied.

The Eagles first took on Reeltown in the 8 a.m. game.

And thanks to a combination of pitching and timely hitting, Goshen was able to stay in the winner’s bracket with a 12-2 win in five innings.

“We were able to make adjustments, which was important to see,” Hughes said.

“That’s not an easy thing to do, especially in a tournament like this. We threw everyone into the fire and they responded.”

The Eagles scored four in the first inning, after a Kaitlin Thomas bases loaded walk and a Hayley Hughes bases clearing double.

In the following inning, Goshen put a three spot on the board after Amanda Griggs, Niyoka Slater and Shelby Jo Vinson all contributed RBIs.

The final two runs of the game came off the bat of Rachael Senn, as Goshen was able to win by the 10-run rule.

Hughes finished 2-for-3 with three RBIs as well.

The team in purple and gold also threw all three of its pitchers, as Alli Warrick, Griggs and Hughes all got turns in the pitcher’s circle.

“The good thing was, we used three pitchers,” Hughes said.

“We did that to get everyone loose and to save innings for (Warrick). But in the end, it comes back down to our main philosophy that it takes everybody to get the job done. Everyone was able to contribute (against Reeltown) and we were able to get a good win.”

The Eagles’ hit parade continued over into the second game on the day, against Choctaw County.

While Griggs got things started with an inside the park home run in the first inning, Goshen exploded in the third inning.

The Eagles sent 15 girls to the plate, with eight reaching base on hits and four reaching on walks to score 10 runs.

Slater hit her first home run of the tournament, and added a RBI double. Vinson and Senn both hit back-to-back RBI doubles, while Thomas added an RBI single.

Warrick connected on a two-RBI double as well.

That would be more than enough for Warrick in the pitcher’s circle, as she threw three innings, striking out three and not allowing a hit.

Griggs again came in for the final two innings, striking out one and persevered the no-hitter.

Choctaw County had just two base runners, each reaching on errors.

“(Friday’s wins were great, but it’s not what we came here for,” Griggs said.

“We are here to win (on Saturday). That’s what we are focused on. I think what we did in the first two games is going to carry over into the rest. We are going to come into (Saturday’s game more focused and hungry than we did for (Friday).”

Again, the Eagles will be playing in the early hours of the morning, as the team will take on a familiar foe in Horseshoe Bend at 8 a.m.

Both teams have a bit of a history coming into the matchup.

Two years ago, Goshen put Horseshoe Bend out of the tournament and just last season, the Mustangs returned the favor to the Eagles by ending their season.

A win this morning will help the Eagles clinch its first ever spot in the state tournament.

“It’s all about taking the next step,” Hughes said.

“But we are not going to stress that, it’s about playing in the moment. We have to tune out all other distractions – like playing in the state tournament. Would we love to get there? Yes. But right now, it is just one game at a time.”