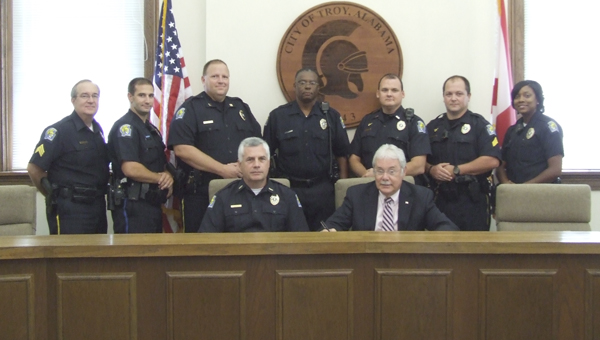 Police officers risk their lives for safety every day, and next week, the city of Troy will recognize that sacrifice.

Troy Mayor Jimmy Lunsford signed a proclamation Thursday declaring May 18 as Peace Officers’ Memorial Day in the city of Troy.

“I think it’s very appropriate we honor police officers who have given their lives in the line of duty,” Lunsford said.

In addition to the celebration of Peace Officers Memorial Day, the week of May 15 to 21 will be recognized as Police Memorial Week.

The week, designated to honor those officers who have given their lives in the line of duty, also is set aside to celebrate the officers currently serving their community.

The annual Police Memorial Day ceremony will be held next at 9 a.m. next Wednesday at the Troy Police Department on Elm Street.

The ceremony is not just to honor Troy Police officers but all in Pike County and even surrounding areas.

Chief Anthony Everage will read the “Roll Call of Honor” of officers who have been killed or died while in the line of duty.

The public is encouraged to attend the ceremony to honor these officers and those serving today.

“The memorial service at our Police Memorial Day is always a moving occasion,” Lunsford said. “At the same time, it’s important we utilize this occasion to thank the men and women in uniform still acting everyday.”