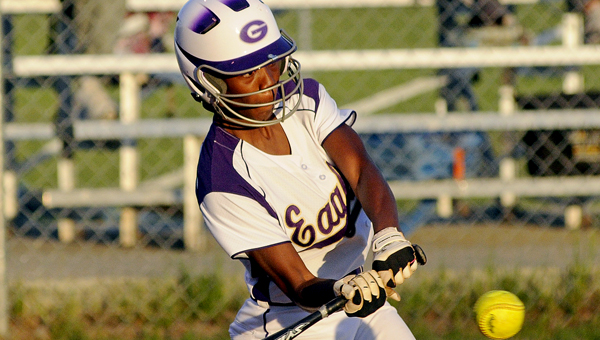 For a third consecutive season, the Goshen Eagle softball program finds itself in a position to go further then ever before.

This time however, the team plans on doing whatever it takes to make the goal a reality.

Each of the last two seasons have ended the same way for the Eagles – in the sectional tournament, one win short of advancing to the state championship tournament.

The results could be a bit different this season, as the team is returning every single member from last season to sectionals this season.

Each of those player come in with the experience and memory of what it is like to play this late in the season.

And that has head coach Dee Hughes excited.

“Our girls have played really well this season against some really good teams,” she said.

“They are coming into this tournament with a lot of confidence and that’s different from how they were a year ago. They know nothing is going to be handed to them – they know they have to bring their ‘A’ game, no matter the team.”

The first opponent for Goshen will be Reeltown, who comes in with a 10-7 record.

This will be the first time Reeltown has made it to this point in the season, but that is not the concern for Hughes and her crew.

“Every girl on our team played last year and was a part of what we did,” the coach said, “this is nothing new for them.

“We are going to be going in to this tournament much more relaxed then we have before. Hopefully, that pays off for us.”

The Eagles enter the tournament coming off one of its best regular seasons ever, with a 25-9 overall record as well as a second-straight area championship.

But while hitting and pitching have played a role, another attribute has played a huge part – the team’s desire to win.

“This team has so much more heart this season then it did last season,” senior Amanda Griggs said.

Even with the confidence the team has going in, there is still a certain amount of pressure to deliver.

“I’m not going to lie, there is some pressure on us,” senior Niyoka Slater said.

“As seniors, we are expected to lead this team to wins. If that doesn’t happen, that’s not a good thing. We just got to play like we know we can play and we will be fine.”

Goshen and Reeltown will get underway this morning at the Troy Sportplex with a first pitch set for 8 a.m.

The winner will go on to play at noon later on.