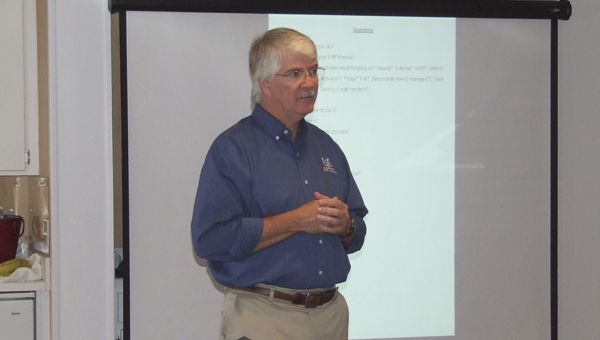 Disaster preparation was the topic at a tabletop drill on Wednesday.

When Melissa Bradford scheduled a natural disaster preparedness exercise for community officials on Wednesday, she had no idea how necessary that training would be.

“This actually has been scheduled for a long time, and then two weeks ago from (Wednesday) is when the tornados happened,” said Bradford, director of planning and development at SARHA.

The disaster training tabletop exercise led by the University of South Alabama’s Center for Strategic Health Innovation, guided members of the community through the scenario of a hurricane.

“I feel like we (Pike County) are well prepared,” Bradford said. “But it would definitely take a collaborative effort, and the more discussions we have, the better prepared we will be.”

Bradford said while it’s important for community officials to continually evaluate their disaster preparedness plans, the reality has hit home even more so after the devastating tornados that hit north Alabama last month.

“It’s a great time for us to start scratching our heads and pulling out our plans for what we would do in a situation like that,” Barnes said.

Barnes was joined by Pike County Deputy Coroner Sandy Nasca, who volunteered in a rural area following the tornados. “Seeing it on TV is completely different from seeing it in real life,” Nasca said.

Nasca said the small community she worked in, though devastated, pulled together to help in whatever way they could. “I suspect Pike County would be the same in such an event,” Nasca said.

Still, she agreed now is the time to evaluate disaster plans. As far as SARHA goes, Bradford said there are several things she thinks should be considered.

“We try to keep a two week supply of everything on hand, but a two-week supply in a situation like that probably wouldn’t last three to four days,” Bradford said.