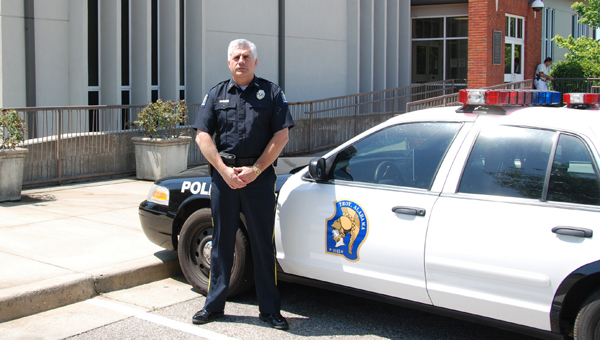 Normally Anthony Everage shuns attention. But on Wednesday, he was the center of attention as news spread that the veteran police chief would be retiring on Sept. 30.

“My phone has been ringing all day,” said Everage, who will have served 14 years as Troy’s chief when he leaves office. “I think I’m about talked out.”

Joking aside, Everage knew that his decision would be the subject of much conversation. But it’s a decision he’s been considering for more than year now. “I’ve been trying to decide what would be the best time for the department as well as for myself,” he said. “I feel like our department is a good, solid police department. We have really good officers top to bottom, and strong leadership at all ranks that makes it possible for me to go.”

Building that consistency in the department has been a hallmark of Everage’s tenure as chief, and one that has drawn praise from city leaders as well the public. “Anthony has lead in the right way, trained in the right way and done things in the right way to have as seamless a transition as possible,” said Jason Reeves, District 3 Councilman. “That says a lot about what kind of man he is … I think he has done everything possible to put the department in a good situation while he’s been there and to ensure it will be the same once he’s gone.”

Reeves’ father, Grady Reeves, was police chief in 1982 when Everage joined the force as a patrol officer. Reeves remembers training the first K9 units with Everage. “I would put on snake leggings and run through the woods and they would chase me … that’s how I got in shape for football,” the councilman said. It’s also how he got to know the man who would succeed his father as police chief and who would become a close friend.

“I’ve known for a while that he’s been planning to go,” Reeves said. “When you do a job as long as Anthony has done it and as well as he’s done it, then it has to begin to take a toll. We couldn’t have asked for a better man to do the job.”

“For me, as a council member, it comes down to this: he took care of his responsibility and did it well,” Witherington said. “We did not have to take care of the Troy Police Departent on his watch … I think history will prove him to be one of the best police chiefs we’ve had.”

Everage came to the Troy force from Crenshaw County, where he worked in the Luverne Police Department and then the Crenshaw County Sheriff’s Department. He began his career in Troy as a patrol officer, a job he relished “because it was something different each day. You never knew what was going to happen.” He advanced through the ranks, overseeing Troy’s first K9 unit, working the housing authority and the narcotics unit, overseeing firearms training and eventually being appointed to succeed Grady Reeves as chief. “I never thought I would be chief,” Everage admitted on Wednesday.

But once he stepped up to the role, he brought his commitment to honesty, fairness and integrity to the role. “I think everybody you deal with, whether it’s the media, a victim, an employee or somebody with a complaint, you have to be honest,” he said. “You’re going to have to make hard decisions, and people aren’t always going to like those decisions, but they need to understand that the decision was made for a reason.”

His tenure has been marked by cases that he will carry with him, even into retirement. “The more recent cases are more on your mind than others,” he said. “And one on our minds every day is the Middlebrooks case..”

Police are still searching for the man who kidnapped Troy student Jordan Middlebrooks from her house on Smith Street in January and brutally attacked her before abandoning her on Needmore Road. The case sparked safety concerns throughout the community.

“We’re working that case daily,” Everage said. “I certainly would like to see that case solved before I leave.”

And as for a legacy, he looks to the future instead of the past. “I think we’ve had a good run of things for the past 14 years, but as far as I’m concerned, how they run when I leave is going to speak a lot about the caliber of people we’ve hired around here.”

Everage said his goal is work with his replacement “for a smooth transition.”

The city council will appoint his replacement. Members have said they will advertise first within the department, allowing the four captains the opportunity to apply for the position if interested. Reeves said he hopes the position will be filled within 60 days.

Meanwhile, Reeves said he has no doubt the Troy Police Department will continue to function well, a testament to Everage’s efforts. “He’s got a legacy, and it’s a positive one. That’s something to be proud of.”

The Pike County Chamber of Commerce now has a physical presence in Brundidge. The Chamber hosted open house and a... read more