Something to cheer about 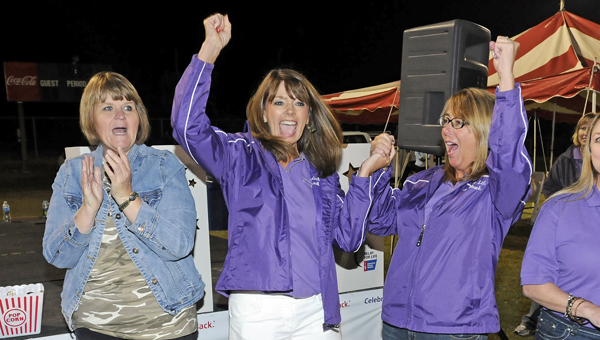 Relay for Life board members Debbie Headley, Pam Little, and Rhonda Turberville react as the total money raised is announced during the 2011 Pike County Relay for Life in Troy, Ala., Friday, May 6, 2011. The total was $168, 047. (Messenger Staff Photo/Thomas Graning)

In good times and bad times, the people of Pike County can be counted on when it comes to answering the bell in the fight against cancer.

At the close of the 2011 Pike County Relay for Life event Friday night, the total of giving for the fundraising campaign in support of the American Cancer Society was announced at $168,047.

“We were extremely pleased with the generosity of the people of Pike County,” said Taylor Jinright, co-chair of the 2011 Relay campaign. “Even in difficult times, people continue to give because this is a fight that we all want to win.”

Jinright said that about $6,000 that has been pledge is yet to be collected.

“That should bring the 2011 total to $175,000 and expect the final number to be somewhere around there and that’s really great,” Jinright said. “We want to thank everyone who gave so generously and all of the teams that worked so hard to make this year’s Relay a success.”

Awards were presented in several categories. The award for the top fundraising team went, again and again, to SARHA.

“SARHA raised an amazing $18,648,” Jinright said. “Every year, SARHA is right up there at the top. The per capita fundraising team was First United Methodist Church of Troy with $13,460. The other team that raised more than $10,000 was the City of Goshen, which was also our Rookie Team of the Year. The Rookie award is given to the first-year team that raises the most money.”

Roy Bray, a member of the First United Methodist Church team, received the award for the highest individual fundraiser. Bray raised $8,500 for the fight against cancer.

“The Avis Synco Spirit of Relay Award was presented to KW Plastics.

“This award is presented to the team that shows the most spirit during the Relay for Life campaign,” Jinright said. “KW Plastics was one of our new teams this year and showed a lot of spirit throughout the campaign.’

The City of Troy received the best tent recognition. “The theme for this year’s Relay was Relaywood and the City of Troy’s tent was set up like the Oscars,” Jinright said. “Some of the women dressed for the Oscars and were outside the tent. Inside, the tables were set up like a formal dinner. They had a unique tent.”

AlaCare won the award for the best banner which had a M*A*S*H theme.

KW Plastics also took first place in the number of laps walked during the event.

“Team members got a bead for each lap walked and KW Plastics had a long string of beads,” Jinright said. “We didn’t count the beads, just measured the length. The Wal-Mart DC was only about 10 beads behind KW.”

“We had a lot of people walking the track at all times and that was so good to see,” she said. “We also had great participation from the teams in cheering our survivors during their lap and the caregivers lap, too. That’s what Relay is all about and that support was one of the things that was so special about this event.”

Jinright expressed appreciation again to all of those who make the Pike County Relay for Life campaign a success. She especially mentioned the City of Troy and the Troy Recreation Department.

“Without them, Relay would not be possible,” she said. “They work so hard all week getting everything ready for the event. We all appreciate what they do. We really couldn’t do it without them.”