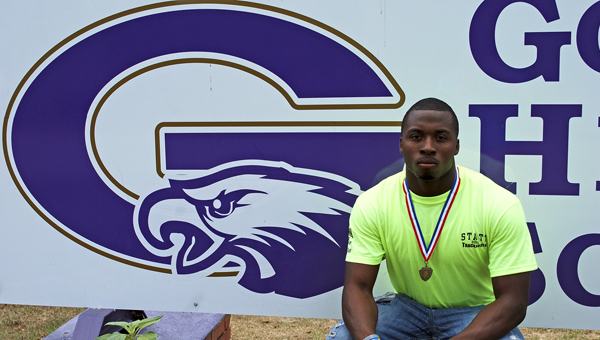 Above, Goshen Marcus Jackson poses next to the high school's sign along with his newly acquired track state medal. On Saturday afternoon, Jackson won the 2A State Track 100-meter dash, with a time of 11.355. This was both Jackson's and Goshen's first individual track state title. (Photo/Greg Rossino).

Most people know Marcus Jackson for what he has done on the Goshen football field for the past four seasons.

But now, as the senior’s career comes to end as an Eagle, Jackson will be known as something else – state champion.

This past Saturday at the 2A State Track Championship meet in Birmingham, it was Jackson who was out in front of the rest of the competition as the Eagle won the Boys 100-Meter Dash.

If any of the spectators had blinked, they would have missed it.

Jackson ran the dash in just 11.36 seconds, but was followed closely by Fultondale’s Marshall Deundrea, who also finished in 11.36.

The final results were discovered when the judges announced Jackson had finished four-hundredths of a tenth faster, finishing at 11.355 while Deundrea finished with a final time of 11.359.

“I was pretty overjoyed and realized,” Jackson said with a smile.

“At first, to be honest, I didn’t think I beat him. I thought he was just a bit faster than me. But when the final results came out, I couldn’t believe.”

The victory was the first individual win for the Goshen track program.

“To be able to end my time at Goshen with a state championship is really special to me,” Jackson said.

“I worked hard for this. I told myself if I was going to run this year, to go all out and do the best I could do. Winning this medal means a lot to me.”

This was the first time Jackson had stepped on the track for Goshen in two years.

In the spring of 2010, the then junior was a part of the baseball team.

And even though being on the track team was a way to stay in shape for his next team, the University of Louisiana-Lafayette Ragin’ Cajuns, it was also a way for Jackson to help pass the time.

“Since the end of football season, I have been in the gym a lot,” he said.

“Track gave me something to do, and something I enjoyed doing. I had a lot of fun being out here and working hard with my teammates. I’m just glad all the hard work paid off in the end.”

The moment was not just special for Jackson – but for his head coach as well.

Sam Dean has been a coach of Jackson for the past couple of years, whether it was on the football field or on the track.

“It was great to see Marcus win on Saturday,” Dean said. “It really was.

“He is a great person and a gifted athlete. I have watched him do a lot over the last couple of years, but winning that race was one of the best. He really deserved it.”