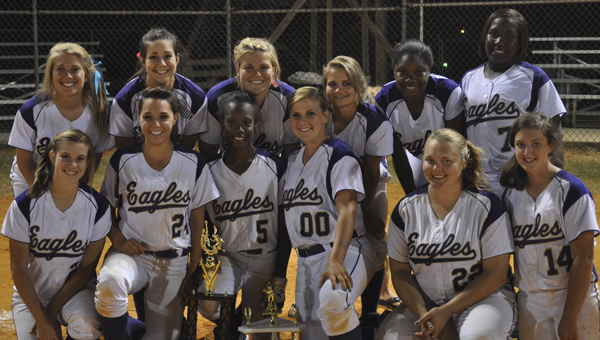 Above, the Goshen Eagles softball teams poses for a picture after winning its second-straight area championship Thursday night. The Eagles will be back in action on Friday, May 13, in the first round of the sectional tournament at the Troy Sportsplex.

For a second consecutive season, the Goshen softball program can call themselves Area Champions, thanks to Thursday’s sweep over Highland Home in the area tournament.

And even though the team is headed back to the sectional tournament, which will be held on Friday May 13 at the Troy Sportsplex, for a second-straight season, this time around things are going to be different.

In the best-of-three series with the Flying Squadron, it was the Eagles that did most of the flying as Goshen won 16-1 in the first game and 21-2 in the second game.

“They really played well in a situation where they needed to play well.”

The final two wins ended Goshen’s regular season with a 25-9 overall record, which one of the best the program has ever had.

After starting the first 10 games of the season with a 5-5 record, the Eagles went on a 20-4 run, including a 13-game winning streak.

What makes that record even more impressive is the caliber of teams the Eagles played this season.

Against ranked opponents like Trinity, Catholic and T.R. Miller, Goshen went 6-1, including taking out T.R. Miller in the Greenville Classic Championship Game.

It’s that tough schedule that has Hughes believing her team going into the upcoming sectional tournament will have a much different showing then last season.

“I am so proud of how well the girls handled our schedule,” Hughes said.

“But I think in the end, it made us a much better team. We stayed focus even though we were on the road a lot. I think we played a schedule that will hopefully have us prepared enough to advance to the state tournament.”

It’s the aforementioned state tournament that has eluded the Eagles the past couple of seasons, most noticeably last year, when the team fell one game short in the sectionals to advance.

“The biggest difference between this season and last season is our girls are more confident this time around,” the coach said.

“I don’t think they are going to be as intimidated. They all have been through this before and are older and more mature. Things like that go a long way. This team wants to show that it can continue to play with some of the top team. And we know that if we can go out and play our game – we are going to have a few big wins.”