Zingara honored for role in concerts 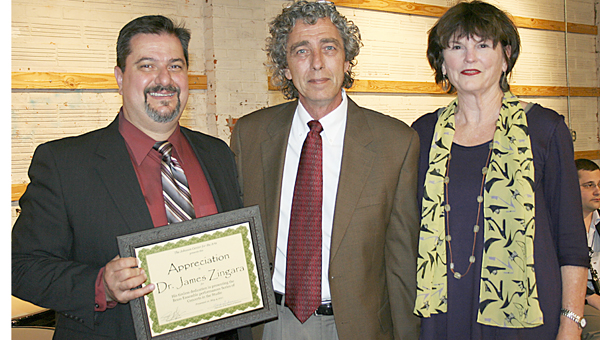 Johnson Center for Arts presented a certificate of appreciation to Dr. Jim Zingara. Above are Zingara, Richard Metzger and Wiley White, both of the Johnson Center.

Not only did Zingara give birth to the idea in 2005, he has fostered it and nurtured it for six years now.

On Wednesday night, Zingara said farewell to the Concert series and was recognized by the Johnson Center for the Arts for his dedication and commitment to bringing quality concert music to downtown Troy.

“The plaque was just a small token of our appreciation to Jim for what has been a wonderful concert series,” said Wiley White, Johnson Center development director. “Jim came to us with the idea of offering free concerts to the community and he has carried the idea on for six years.”

White said that she remembers the first concert at the Studio at Christmastime in 2005.

“Back then, the Studio had an old garage door and no heating or air,” she said. “We rented torpedo heaters that we had to keep turning on and off. We would have to turn the heaters off when the music started so people could hear. But it was a beautiful Christmas experience and that was the first time that we realized how good the acoustics in The Studio are.”

The Concerts in the Studio have been presented five times a year and Zingara has taken care of every detail, from setting the program to the musicians.

“The concerts have given us the opportunity to present upscale musical programs that include classical and chamber music,” White said.

“And, they have made us aware of tremendous talent that is being developed at the John M. Long School of Music.”

White said the Concerts in the Studio Series has also strengthened the town and gown relationship between the City of Troy and Troy University.

“The concerts are great experiences for the university students and the community and bring us closer together,” White said. “What Jim had done is a wonderful thing for all of us. He has promoted what an arts center is supposed to be about and we will always be grateful to him and wish him all the best at UAB.”

All invited to Relay tonight