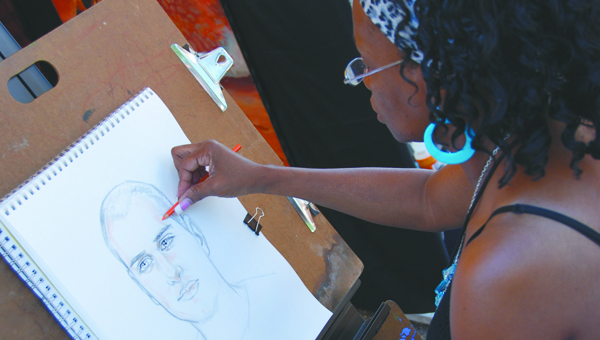 Hill of Trafford was chosen from the 75 artists and craftsmen who participated in the 9th Annual TroyFest that is held in memory of Pike County artist Jean Lake.

“TroyFest is a juried show and we have judges from outside the area,” said Stephanie Baker, arts and crafts chair, “This year Al Head, executive director of the Alabama State Council on the Arts, was the lead juror. Bill Hill was chosen from an outstanding group of artists and we congratulate him and all the winners.

Suzan and Chuck Buckner of Woodville received recognition for the most creative use of materials. Gary Cremeens of Ramer received the demonstrating artist award. The Freshman exhibition award went to Robert Bruce, Chancellor.

Dawn Prietz of Marianna, Fla., was given honorable mention by Head.

Baker said from the perspective of the organizers of the 2011 TroyFest, the quality of the show was the best ever.

“The diversity and quality of the artwork was outstanding,” Baker said. “Many of the artists told the organizers that TroyFest is their favorite show. We may not be the largest but we are the friendliest. Hospitality is important to us. There are things that we can’t control such as the weather and whether or not people spend their money. But the hospitality is certainly something that we can control.”

Bonnie Heinecke, metal artist, travels from Missouri every year to participate in TroyFest.

“These are the nicest people in the world to work with,” Heinecke said. “If TroyFest weren’t a great show, I wouldn’t drive 12 hours to get here.”