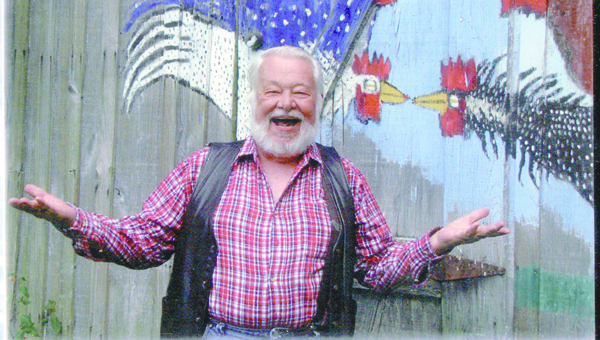 Gary Carden will be the featured artist at the June event.

Appalachian storyteller Gary Carden is coming to the We Piddle Around Theater in Brundidge for the annual June Buggin’ Tale Tellin’ on June 9 and 10.

Tickets are $20 for each performance will include pre-show music, the lunch/box supper and the storytelling event. Tickets will go on sale Wednesday at Rue’s Antiques in Brundidge or by calling 334-735-3125 from 10 a.m. until 2 p.m. Wednesday through Saturday.

Carden of Western North Carolina told his first story to 150 leghorn chickens when he was only six years old.

“The audience wasn’t attentive and tended to get hysterical in the dramatic parts,” Carden said laughing. “It was an auspicious beginning but here I am many years later.”

Fellow storyteller Sheila Kay Adams has performed at the National Storytelling Festival in Jonesborough, Tennessee many times and has seen and heard tellers from all over the world.

“They are some of the best storytellers to walk on stage but my favorite storyteller is still Gary Carden,” Adams said. “He doesn’t perform. He talks – with a heart full of mountain and a mouth full of real. Nothing can beat that.”

Carden is also an author and playwright. He wrote the one-woman play, “Birdell, that was so well received at the We Piddle Around Theater in 2008.