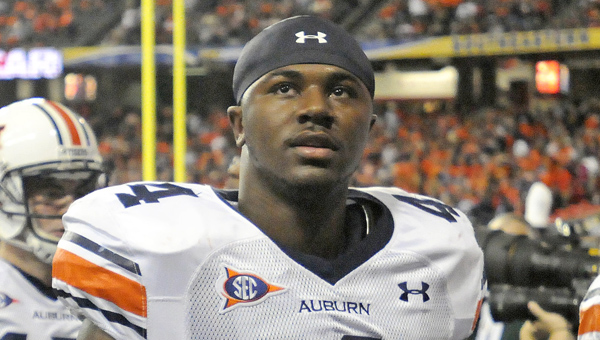 Zac Etheridge (4) walks off the field before the 2010 SEC Championship between Auburn and South Carolina in Atlanta, Saturday, Dec. 4, 2010. (Messenger Staff Photo/Thomas Graning)

The past two years have certainly been impactful ones for Zac Etheridge.

Everyone already knows the Troy-native’s story. The Auburn Tiger defensive back suffered a life-altering and possible career-ending neck injury back in the fall of 2009.

However, less than a year later, Etheridge was back on the field for the start of his senior season – one that ended with a National Championship.

Now, Etheridge is preparing and waiting for the next chapter of his life.

And it will begin with one simple phone call.

As the NFL Draft continues into today, Etheridge will be waiting for his name to be called and the opportunity to fulfill a dream of playing in league he has watched since his childhood.

This morning, Etheridge and his friends and family will gather at the Troy Parks and Recreation gym to not only celebrate together but to hopefully also witness the beginning of the former Charles Henderson Trojans’ professional career in the NFL.

“It means a lot to me and my family,” Etheridge said Friday night.

“To be blessed with the opportunity to play at a great university and then have the chance to better myself and continue on to try and play at the next level.”

According to Etheridge, the range where he could be drafted is from the fourth round to the sixth round.

In 46 games played throughout his four-year career, Etheridge finished with 151 tackles, three interceptions and one touchdown.

Even though the waiting may be a bit nerve racking and even exhausting at times, he will be doing it with his hometown friends and family by his side.

“Any player wants to get a call from the NFL as quickly as possible,” Etheridge said.

“But what is going on (today) is really just a family thing and we just want to have a good time. It’s not all about me, we just wanted to put together a weekend where everyone can have fun, together.

“If my name does get called, we will just have another reason to celebrate,” he added.

Since the National Championship game in the beginning of January, the past couple of months have been a whirlwind, as the Auburn senior has gone from work out to work out, city to city.

However, there has been one constant in Etheridge’s life each day – his thankfulness.

Every morning begins with a tweet to his nearly 1,000 followers that usually reads: “Thank God for waking me up this morning.”

If in fact Etheridge’s name is called today, he said it is because of the love and support the people around him showed when he needed it the most.

“These are the people that have supported me since day one,” Etheridge said

“Everyone goes through adversity at times.

“You have to be able to overcome that. Everyone celebrates the highs but I would not have been able to through everything that I did without my family and friends.”

As far as which team Etheridge hopes to be hearing from and playing for at the next level, he said he does not care, as long as he gets the opportunity.

“To me, just have get that chance to play for an organization would a blessing,” he said. “Growing up, you have your dreams and your goals and there are a lot of people that tell you that you aren’t going to make it. I have had my mind set and my goals set, and I am going to do whatever I can to achieve them.”

Troy's Jerrel Jernigan (3) runs the ball past Florida International's Anthony Gaitor (7) during the second half an NCAA football... read more