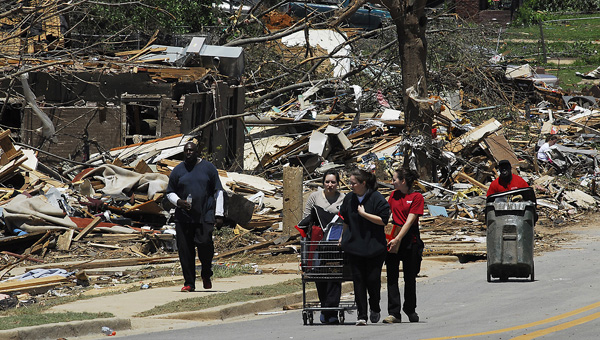 People walk near University Boulevard with their belongings Thursday April 28, 2011, after a tornado struck Tuscaloosa, Ala. the day before. Massive tornadoes tore a town-flattening streak across the South, killing at least 269 people in six states and forcing rescuers to carry some survivors out on makeshift stretchers of splintered debris. (AP Photo/David Bundy)

Bray and his five-year-old son, Chance, waited the storm out in the basement of their home. When the storm had passed, they went outside to find that not even a flowerpot had been moved. That was in stark contrast to the images that were being flashed across the television screen — images of the destruction of downtown Cullman.

“If it had not been for the television, nothing would have seemed out of the ordinary,” Bray said. “Then, in a short time, we lost power.” 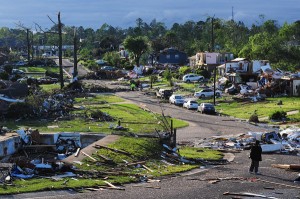 A resident of the Smithville community of Pratt City stands among the wreckage from the April 27 tornado. (Shelby County Reporter Photo/Jon Goering)

Bray is an anesthesiologist at the local hospital, which is operating via generator power.

“The damage to the TVA power plant will not be repaired for up to 10 days,” he said. “At the hospital, all elective surgeries have been postponed, only emergency surgeries will be performed. We’ll run a holiday and weekend schedule until we have power again. I’ve never seen anything like this. A few snow days but nothing like this.”

Other than uprooted trees and long lines at the gas pumps, Bray said it was life as usual along I-65 as he made his way back to Pike County Thursday to spend a few days with his parents.

The tornado that hit Tuscaloosa Wednesday afternoon was nearly a mile wide and packed winds up to 200 miles per hour. I came roaring toward Tuscaloosa bouncing up and down like a yo-yo.

Rendy Taylor and his brother Keith Taylor, formerly of Pike County, watched as the massive tornado came bearing down on them as they stood in Rendy Taylor’s Tuscaloosa home.

“You could see the tornado coming right at us and, then, when it got to the Black Warrior River, it turned just a little and I knew that it was going to miss us,” Keith Taylor said. “But I knew that some people weren’t going to be that lucky.”

After the tornado passed though Tuscaloosa, the Taylor brothers left home in hopes of locating a friend who lives in the area hard-hit by the tornado.

Keith Taylor said power lines were down everywhere and the smell of gas was prevalent. “It was scary because you knew that, with all that gas, something could blow up any minute,” he said. “Over on 15th street, it looked like a war zone. People were walking around like they were in a daze. There was so much destruction. ” 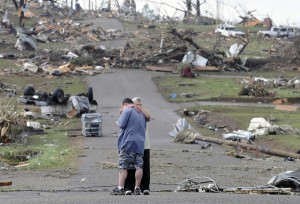 Michael Dunn is hugged by his mother Patricia Dunn as they stand in the road that lead to his house which was completely destroyed after a tornado touched down, Wednesday, April 27, 2011 in Concord, Ala. (AP Photo/Birmingham News, Jeff Roberts)

Rendy Taylor said it was almost impossible to get a cell call through and large numbers of parents were running along the streets, frantically, looking for their children. “This morning (Thursday) a mom and dad were on television making a plea for information about their daughter,” he said. “They had flown in to Tuscaloosa because they couldn’t get in touch with her. I heard later that her body was found. I don’t know if that’s true. I hope it’s not. But it’s a terrible, terrible situation here.”

Taylor said the mood in Tuscaloosa Thursday was somber.

“Everybody here knows someone that was directly affected by the tornado,” he said. “Everybody’s in a state of shock. There are so many deaths and so much destruction. It’s just very emotional, very.”

But, Taylor said everybody also knows that it could have been much worse. “The path the tornado took was right down the heart of Tuscaloosa and it was so close to the university campus,” he said. “If it had taken a path through the campus, there’s no telling how many lives would have been lost.”

So, in that way, we have to be thankful. As bad as it is, it could have been much worse. But this is a sad time in Tuscaloosa.”