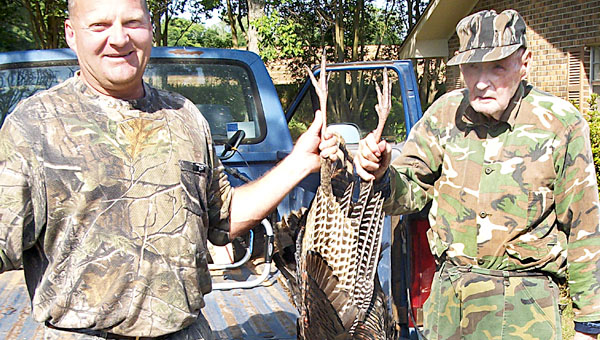 Jerald Brantley of the Banks community is not like most 99-year-old men.

That’s why it was that he was sitting “in the weeds” at the crack of day clucking like a hen. And, that also why Brantley now has an old tom turkey with a 4-inch beard to his partial credit.

With his 100th birthday coming up in June, Brantley’s list of “things I want to do in my first 100 years” included “flattening another turkey gobbler.”

Brantley knew that shooting a turkey would not be as easy as it was, say, 10 years ago. He also knew that if the old tom approached in such a way that he had to swing the gun around, he would just be whistling Dixie. So, he asked his grandson, Mark Brantley, to join him on the hunt.

Both were equal to the task.

“I called the turkey up using a Lynch’s 101 model box call. I don’t use those reed calls cause I’d lose my false teeth,” Jerald Brantley said, with a chuckle.

Brantley did some of the best box calling of his many years and it didn’t take long for the tom to come “looking for the ladies.”

“My granddaddy just can’t get the gun around quick enough to shoot now but he loves the woods and he still knows how to use a box call,” Mark Brantley said. “He was a big help in getting the end product.”

The turkey had only a 4-inch beard but Jerald Brantley will be 100 years old in six weeks and, “If it didn’t have a beard at all I was going to kill it, because my granddaddy called it up,” the younger Brantley said.

Jerald Brantley said that, in his younger days, he’d “flattened” rabbits, squirrels and turkeys all over the country.

“Back then up around the Uchee Creek and along the Alabama River there were wild turkeys everywhere,” he said. “But there were no game laws and folks shot turkeys just to be shooting something. Just about wiped them all out.”

Brantley said he likes to turkey hunt because an old tom is a cunning bird.

“He’s not just going to walk out of the woods so you can kill him,” he said. “You’ve got to work at it. You’ve got to trick him out. You’ve got to sound like an old hen and my favorite way to call is with a box call. Those old toms are hard to hit because they’ve been shot at so many times. They’ve gotten smart.”

Brantley remembered an old gobbler that he had been trying to harvest “forever.”

“He came over the ridge and out in the pasture, strutting real big but he wasn’t coming to me,” Brantley said. “I was sitting on a log at the edge of the swamp. I was too far off but I shot and knocked him down. I got closer and shot again. When I got to him, he had his fantail all stretched out. I said, ‘You got me up at four o’clock all these mornings and you are my turkey now.’ That felt real good.”

“I went all over the county weighing him,” he said, laughing. “But, what I was really doing was showing him off.”

A lot of hunters can top a 21-pound turkey, but now, Brantley’s got something else to show off – the four-inch beard of a tom that a 99-year-old man called up.