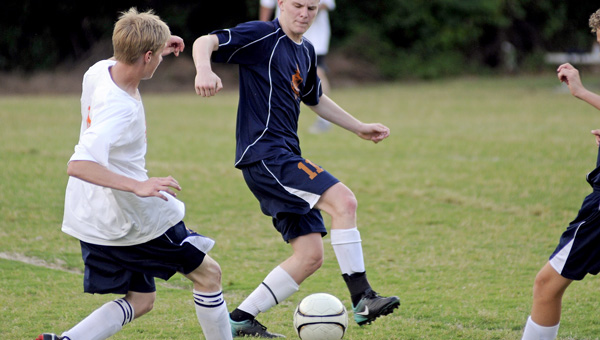 As the sun set on Monday afternoon, it was also setting on the Charles Henderson soccer 2011 season.

The Trojans had one final home game of the season scheduled for Monday evening against Opelika, however it was canceled last week, unbeknownst to the players.

When the CHHS players arrived to the field, ready to play, the team did not find a visiting team, but an opportunity to not only play one another, but their coaches as well.

Instead of just ending the season, head coach Olaf Lieb decided it was time for his team to have some fun – as players, coaches and parents took to the field for a scrimmage.

“(Opelika) had canceled last week, but I didn’t tell our team,” the coach said with a laugh. “I decided to turn (Monday) into a little party, and it was a lot of fun. This team worked hard this season, so this was a nice way to end (the season).”

The season itself was not all fun and games however.

The Trojans finished just 3-10 on the season, failing to advance to the playoffs in consecutive years. But with the amount of young players on this season’s squad, a lot of goals were met in the coach’s eyes.

“We were a very young team this year,” Lieb said, “but that didn’t stop us from competing hard against older teams every time out.

“This year, we gained the knowledge of playing together. There was a lot of growth and improvement from the beginning of the season until now.”

On the Trojans’ roster, there were no seniors, and just three juniors in Skylar Sexton, Scott Kelly and Nathaniel Salmon.

There were a total of nine 7th and 8th graders on the roster as well.

“I couldn’t even begin to tell you who played the best for us, or who was the best player,” Lieb said.

“Everyone plays such a vital part. Soccer is a sport where you really have to play as a team. The one thing I can say about this team is, to see them play as individuals at the beginning of the season to playing together at the end was very important and impressive.”

While this season did not end the way either Lieb or his players would have liked, it may have opened the door to a lot of success in the coming future.

“I don’t want to curse myself by saying the wrong thing,” the coach said. “But I think this team will have a lot of potential to go further then any other team.”