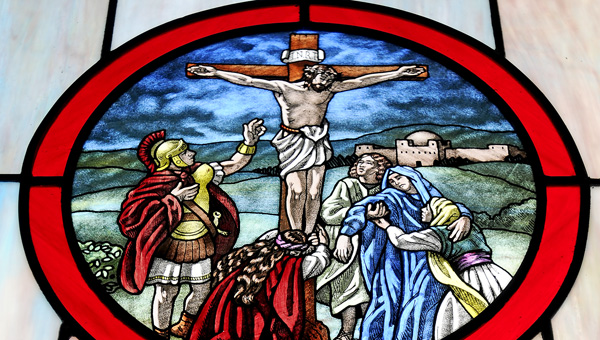 When looking back at the grave and difficult recent times – the hurricane in Australia, the tsunami and earthquake in Japan and the fighting in the Middle East, it’s easy to wonder how sense can be made of these horrible events.

“They shake you up,” said the Rev. Den Irwin of St. Martin Catholic Church in Troy. “We might ask how God can allow these things to happen. As we celebrate the death and resurrection of Christ, Easter gives meaning to these events. God took on the Flesh and entered into our suffering. He took our suffering upon himself when He could have come any way that He wanted but He came as a servant to us.”

Irwin said Jesus was a great example – teaching, healing, forgiving and ministering to the outcast of society – and washing the feet of His disciples.

“We often forget the price and cost of His coming,” Irwin said. “Our hope is in that the Lord went through the bearing of the cross and the suffering and dying for all of us.”

In the fullest possible way, Jesus took on all that is horrific about being a human being.

“But He conquers it in His resurrection and rising from the dead,” Irwin said. “The message of Easter is the same message of any time. It is timeless as it applies in different ways to every time, just sometimes, more powerfully.”

Via television, it is possible to watch as parts of entire cities are swept away and destroyed and lives lost but there is still hope.

“There is hope because this world is not all that we have to live for,” Irwin said. “We have eternal life offered to us through the suffering and resurrection of Jesus Christ. That is the message of Easter 2011 and of all time.”

The message of Easter became very real to David “Doc” Kirby of Troy as he waded in the Sea of Galilee and touched the stones on the Wailing Wall, as he walked where Jesus walked and prayed in the Garden of Gethsemane.

“When you have been to the Holy Land, the Bible is more real to you,” Kirby said “Easter this year will be a richer, deeper experience for me than it has in the past 58 years.”

Kirby traveled to the Holy Land in November 2010 with Global Mission Project, a non-profit music ministry. It was Kirby’s 14th trip with the ministry and the most meaningful.

“Our band played concerts in Bethlehem, Jerusalem and Tel Aviv and the response throughout Israel was inspiring,” he said.

“At a concert in Bethlehem, where there is friction among the Muslims, Jews and Christians, a car came by that was filled with veiled women and they waved to us. They were touched by our music. The response of the people was such a great joy.”

Kirby said he found inspiration at every turn in Israel beginning with the tour guide that was assigned to the band.

“Andre was a Christian,” Kirby said. “Of the 500 different tour guides in Israel, only 45 are Christians. Andre and his twin brother were among them. As a minister, I usually serve as the chaplain of our group but I gave that over to Andre and he led the devotionals in a much better way than I could have.”

Kirby said the band visited the traditional places that tourists want to see but they also were able to go off the beaten path at times.

“We have to remember that, for three centuries, it was illegal to be a Christian,” Kirby said. “So where things actually occurred were the best guesses and remembrances of people. It’s not possible to know for certain the actual site of many Biblical places and events.”

One of the most memorable places that Kirby visited was the Garden of Gethsemane.

“The garden is not big and whether the olive trees that are standing were there when Jesus prayed there, no one is sure but there was a sense of great age in the garden,” Kirby said.

The “Jesus Boat,” a first century boat, was preserved in the mud of the Sea of Galilee.

“Whether Jesus rode on that boat no one knows but there is an enormous sense of history in Israel and to see an actual part of it was inspiring,” Kirby said. “Seeing the Plain of Armageddon, it was possible to envision a million men with swords and shields there.”

Kirby said the visit to Israel gave him a better appreciation of what life was like 2000 year ago and actually experiencing the Road to the Cross brought better understanding to what it was like for Jesus.

“The road is more than a 45 degree angle,” he said. “And Jesus was badly beaten and carrying a heavy piece of the cross as He stumbled up the stone enclosure to get to Golgotha. To see where these things occurred kind of fleshes everything out.”

Kirby’s visit to the Holy Land, coupled with personal losses, will bring a different perspective to Easter this year.

“I’ve lost thee people who were very close to me — a friend, Tom Bracewell, my sister-in-law, Dale Griffin, and my dad, Jim Kirby,” he said. “They were all believers and I’m a believer and I know that I will see them again. I know that the last chapter of life has not been written as we are lowered in the ground. The Risen Lord is the Hope of Easter.”