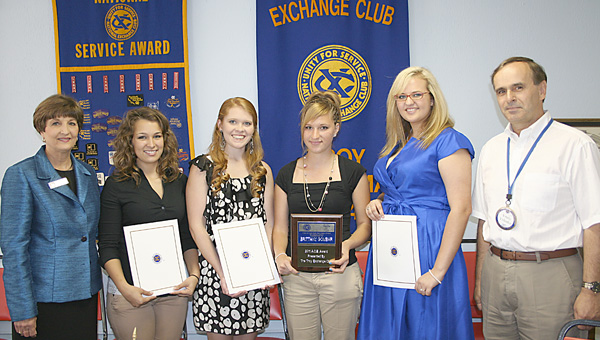 The annual awards recognize and reward outstanding high school seniors who have overcome obstacles on the road to successful high school graduation.

The Troy Exchange Club recognizes an outstanding senior from each of the four high schools in the county with A.C.E. Award of Achievement certificates and the winner of the A.C.E. award advances to the Exchange Club’s District A.C.E. Awards competition.

Diane Aman expressed congratulations to the nominees and said that all four are winners because they serve as a powerful example to all students that hard work and perseverance do pay off.

“All of the nominees are deserving but we can only select one for the A.C.E. Award,” Aman said. “Brittany Gombar lost both her parents when she was very young and she has persevered despite physical challenges and strives to do her best in everything.”

“Brittany said that graduating from high school is her biggest achievement but it’s only the beginning,” Aman said. “Her goals are to attend a four year college and earn a degree in physical therapy and to encourage and inspire others to accomplish their goals.”

Gombar humbly and graciously accepted the A.C.E. Award and gave the credit for her achievements to her grandmother, Shirley McCann of Brundidge.

“I lost my parents when I was three years old and my grandmother has supported me like no one else,” Gombar said. “I love her and appreciate her. I was born with cerebral palsy on my right side but I’ve pushed myself to go as far as I can go. My grandmother has been with me all the way.”

McCann said her granddaughter has worked very hard and understands that she is not disabled, just different.

“It has not been easy but Brittany keeps moving forward,” McCann said. “I’m proud of her and of this award for her. I think she deserves it.”

Gombar received a plaque and a check in the amount of $1,000. The other nominees received certificates and checks for $50 each.

“One objective is to help encourage young people to overcome hardships and get back on the track toward a high school diploma,” Aman said. “The other is to recognize students who are often overlooked for their accomplishments.”