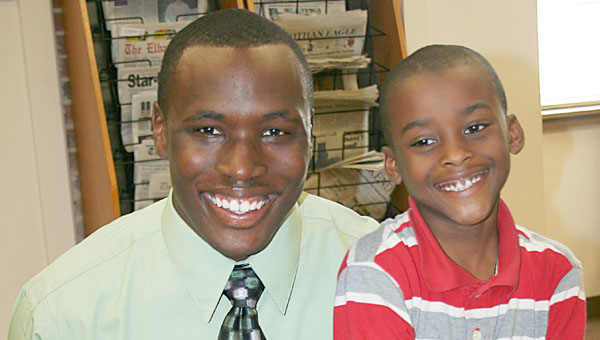 David Bass was named tutor of the year at the Troy Public Library.

David Bass, a sophomore elementary education major at Troy University, was named the Outstanding Tutor of the Year at Troy Public Library.

The award was presented early this year because Bass will be leaving the program to serve his country with the Army Reserve 1015th Maintenance Company in Iraq.

“David is the recipient of the 8th Annual Outstanding Tutor of the Year Award. In the past, we have had a difficult time making the selection, but this year, David was chosen, hands down,” said Teresa Colvin, TPL tutorial program coordinator. “The entire staff has been impressed with his skills. He has an amazing ability to work with children and he has gone above and beyond what has been asked of him and expected.”

Bass has logged 60 hours tutoring the young student assigned to him.

“Usually, our tutors spend at least an hour a week working with the children but David has been here as many days each week as his schedule allows,” Colvin said. The student he has tutored has shown great improvement in his grades and is eager to learn more.”

Bass said working with a young student who is having difficulty with schoolwork has been a very rewarding experience and it has reaffirmed his desire to teach elementary school kids.

“Teaching has become my passion and that’s a little strange because I had always thought I wanted to be a lawyer,” Bass said. “But I’ve always enjoyed being around children

and my interest in children was intensified when I was hired as a tutor at Florala Middle School during my freshman year at Lurleen B. Wallace Community College in Andalusia.

“The experience was so rewarding that I decided that developing the minds of children and giving them a chance at a better future could very well be my calling.”

Bass was hired as a peer counselor in the Upward Bound program at LBW where he received many appraisals and awards. It was there that his career path of becoming an educator became his career goal.

“I come from a one-parent home and have been greatly influenced by my mother and grandparents who place great emphasis on education and Christianity,” Bass said. “The Tutor of the Year Award means a lot be me because I know most of the other tutors and how dedicated they are and how hard they work. Any of them could have received this award, so to receive it is a great honor for me.”

Bass is involved in other volunteer activities include youth leadership in the American Legion Auxiliary, tutoring and teaching children to play the piano and drums for the Carver National Alumni Association and as a musician in his church, Six Avenue Missionary Baptist Church. He also plays the piano and drums for other community functions.