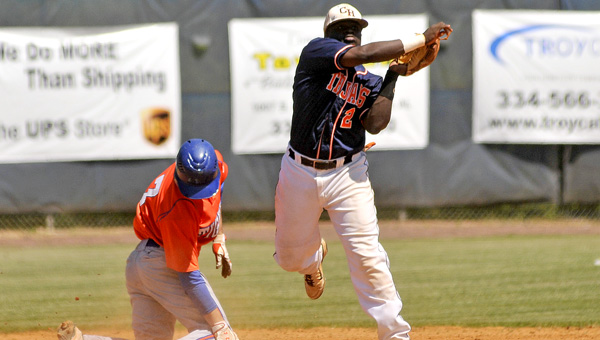 Another regular season has come to an end for the Trojans of Charles Henderson.

And that can only mean one thing – the postseason is about to begin.

Since taking over at CHHS as head coach of three years ago, Derek Irons has helped take the Trojans to the playoffs each time.

There will be a major difference however from the previous two years and the current year – the Trojans will be starting the second season on the road.

Up first for CHHS is Russell County, who finished the regular season with a 26-7 overall record.

While the Trojan coach acknowledged his team will be up against some adversity come Friday afternoon, being on the road against a quality opponent, this is nothing new for his team.

“There is going to be a little more adversity for us to start off with, being the road,” Irons said, “but you know, we have played a lot of games on the road this season.

“At this point in the season, home and road really shouldn’t play to much of role. It’s going to be a playoff atmosphere and we have to make sure we take care of what we need to do early on.”

In the past four seasons, the only time Russell County and CHHS played against one another was back in 2008, with Warriors earning a 7-3 victory at Frazier Field.

This will be the 13th consecutive year the Trojans have been in the playoffs.

Even though the Warriors will also be competing for a championship for consecutive years, and come into the postseason after a strong regular season, Irons hopes his guys won’t be intimidated going in.

“Over the last 10 years, they have been one of the strongest programs in the state at any level,” Irons said. We can’t be in awe of the name – we have to go play.

“I think we match up OK,” the coach continued.

“They are a good team, no doubt about it. But we feel like we have been putting a good plan in place all week and if we can control what we can control we are going to be right there with them. (CHHS) has shown that they can play with anybody this season, we just have to be consistent in all areas of the game.”

Heading into the playoffs, the Trojans are winners of three of their last four games, to finish off a 20-12 overall record.

That final stretch of the season is one that several players believe will help breathe some confidence heading into its games against Russell County.

“Right now, I think everyone is focused and ready to go,” Jalin Lawson said Wednesday.

“We have had some ups and downs this season, but I think that’s going to be good for us. We learned a lot this past season and now we are ready for the second season to begin.”