Bennet continues CHHS tradition at the next level 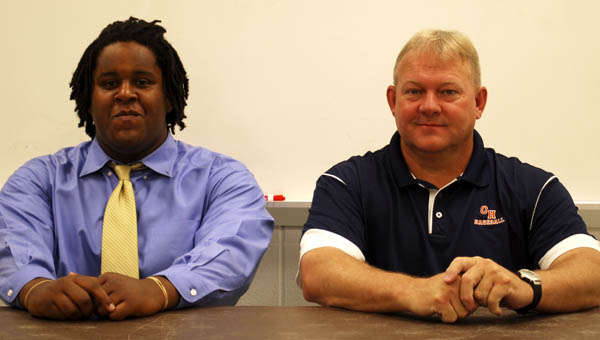 In recent years, the Charles Henderson football program has become known for more then just the wins on the gridiron.

With senior Devin Bennett signing with Miles College shortly after Signing Day in February, a total of six Trojans will have be advancing from the high school ranks to the collegiate level.

As for Bennett, it came down to a place where he could be comfortable playing at – and most importantly, happy.

“Basically, I was still undecided and thinking about what I wanted to do and what was best for me,” Bennett said.

“When it all came down to it, Miles was perfect for me.”

Even though the senior was primarily known for his work on the defensive side of the ball, he said he would play where he can help the team the most.

“The coaches at Miles were telling me exactly what I wanted to hear about football, so I felt like it was the right move for me. There I am going to be playing defensive lineman – I am determined to get up there, work hard and start.”

In his final season with the Trojans last fall, Bennett finished with 25 solo tackles, with 13 assists, two sacks and three tackles for a loss.

In the end, even though he may not have signed with his fellow teammates, Bennett said he was happy with his final decision.

“There was a lot of stress involved with this whole process,” the CHHS senior said.

“So to be done with it all is a huge sigh of relief. After I was done, I felt so much better about everything.”

Bennett now joins a long and growing list of CHHS players who have taken the next step to play college football.

In the last 10 years, CHHS has had players at every NCAA University in Alabama with the exception of Tuskegee. Since 1996, 49 different players have signed scholarships and have played in the states of Tennessee, Oklahoma, Kansas, Mississippi, Minnesota, North Carolina, Virginia and Iowa.

During that span, the program has won more games then every before, going 81-40.