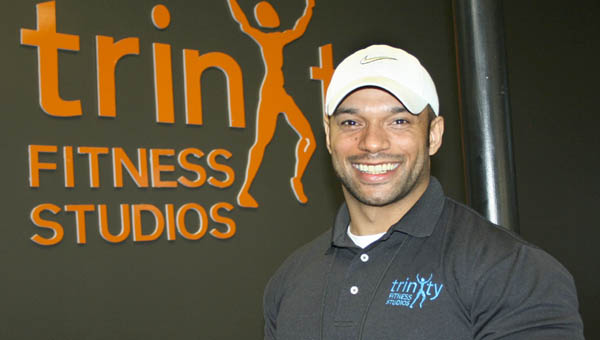 C.C. Matthews poses for a picture in his fitness studio. Matthews will be trying to becoming the new trainer on the television show “The Biggest Loser”.

Since C.C. Matthews opened Trinity Fitness in Troy four years go, he has led 900 clients in huffing and puffing and lowering their weight and getting their bodies into a healthier state of being.

But now, if Matthews has his druthers, he will soon be taking leave of Trinity Fitness for, perhaps, up to a year to be a trainer on “The Biggest Loser” television reality show.

The show features obese people competing to win a cash prize by losing the highest percentage of weight relative to their initial weight. And, to lose weight the right way, a personal trainer is a must for the guys and the gals.

When Matthews learned that the popular reality show would be hiring a new personal trainer, he thought that would be something that would be challenging, personally satisfying and a lot of fun.

“I’m just getting started with the process and it’s a long one,” Matthews said. “The first step is the application. That’s where I am now. I’ve just sent in an application. After that, it’s an elimination process until the trainer is selected.”

Matthews said he has no idea what kind of chance he has to move up in the selection process.

“But, I thought, why not?” he said. “Right now it seems that it’s like a casting call and I’m in it. I don’t know what the rating scale is or how the trainer will be selected. I had hoped there would be an opportunity for people to vote for the trainer but there’s not.”

Matthews said being a trainer on “The Biggest Loser” would be an opportunity to travel abroad and to take what he loves to do to the national level.

“It will be a couple of months before I know if I made it through the application phase but, hopefully, I will,” he said. “This is something that I would love to do and it’s something that I could do. I have trainers who could keep things going at Trinity Fitness. I’m excited about the possibility.”

“The Biggest Loser is currently in its 11th season and normally the show features two seasons a year. Season 11 premiered on January 4, 2011.