Church to perform Stations of the Cross 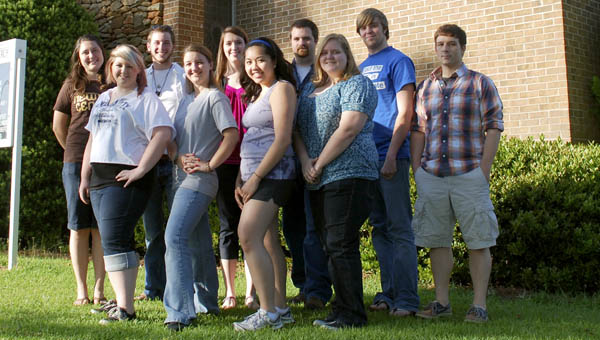 The cast of the Stations of the Cross pose outside of St. Martin of Tours Catholic Church. The play, originally slated for Good Friday, will instead be Wednesday April, 20, because many university students will be celebrating Easter at home with their families.

Easter is fast approaching and in order to get ready for the celebration, St. Martin of Tours Catholic Church will be performing a Live Stations of the Cross passion play that highlights Jesus Christ’s last moments leading up to His crucifixion.

The play, originally slated for Good Friday, will instead be Wednesday April, 20, because many university students will be celebrating Easter at home with their families.

The Troy University Newman Center will be performing the play and many of the students are trying to get into the right state of mind, thinking about what the walk to Calvary must have been like.

Brandon Rosso, who will portray Jesus in the upcoming play, said he has some pretty big shoes to fill.

“To be honest, the idea of me playing Jesus started off as a joke,” Rosso said. “But, when they picked me for the part, I knew I had to take this seriously.”

Rosso said he has grown to appreciate the part and feels as though he will learn a lot about the Gospel by “being in Jesus’ shoes” for a little while.

“No one can really understand the pain that our Lord went through during His walk to Calvary, but doing this gives me a little bit of an idea,” Rosso said. “It’s really powerful to step into our savior’s shoes for about 20-30 minutes. It’s a little bit of an eye-opener.”

According to Rosso he and the others are preparing for their perspective parts by praying before each practice.

“We pray before each practice and this comes up in my prayers, personally, quite often,” Rosso said.

“I pray the Rosary about it and, really it is a good way to prepare for this part because you dwell on the life of Jesus and certain mysteries of the Rosary deal with the Crucifixion story. So, it’s a good way to get yourself into that frame of mind.”

Casey Green, student director for the play, said she is excited about her part in directing the play.

“It’s an honor,” Green said. “I did a lot of research by reading the Bible, of course, but in addition to that I watched the Passion of the Christ by Mel Gibson for the first time.”

Green said the movie put a lot of things into perspective for her, as she found the movie to be both powerful and compelling.

“Obviously, this play won’t be as intense as Mel Gibson’s movie, but the movie itself did give me some ideas,” Green said. “I’ve been trying to impress those ideas upon the other students involved and we have been offering up a lot of prayer surrounding this play.”

The play begins at 7 p.m. and all are invited to attend.