PLAS students have fun in the sun 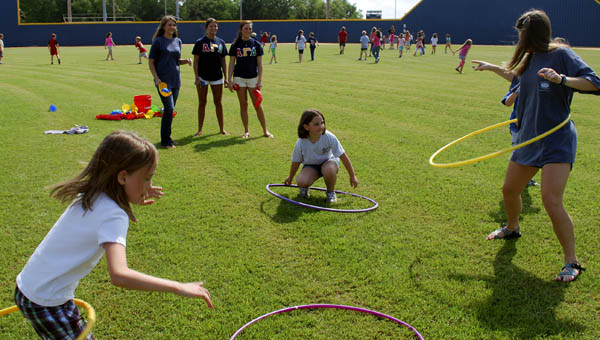 Pike Liberal Arts students practice their hula-hoop skills during a day of fun, celebrating finishing a week of difficult testing.

It was an all-around “fun day” at Pike Liberal Arts School last Friday, when students celebrated finishing their SAT-10 testing.

Mrs. Dee Bennett, Assistant Headmaster at Pike Liberal Arts, said the “fun day” is culminating the week of testing the students underwent and that the celebration is the fact that the students are finished and “achieved their best.”

“It was a very stressful week, but we’re tickled at our results,” Bennett said. “We scored in the 70th percentile or higher in all areas of the SAT.”

Because the students did so well, they were awarded by having fun in the sun and drinking smoothies to help beat the heat.

It was a hot and humid day, but that didn’t stop 8-years-old Shelby Renfroe and Ivy Clark, of Troy, from having a blast.

“Today has been the best day ever even though it’s hot,” Clark said.

The students played outside and had the opportunity to relieve their school stresses in a variety of different games.

“We had fun,” Renfroe said. “We played hula-hoops, kickball, soccer, and we threw baseballs and jumped rope.”

Troy University students, who are all too familiar with the stress of taking exams, took time out of their day to come celebrate the children’s successes.

Sarah Jane Walker, 19-year-old freshman Elementary Education major and member of Alpha Gamma Delta sorority, said she enjoyed playing with the children and enjoyed watching them “have a whole lot of fun” playing out on the field.

“We were sent out into different sections and I was in charge of the Soccer section,” Walker said.

“I got to oversee a couple wild games of Soccer. A couple of the girls just stayed with me the whole time, but the boys got really in to it.”

Walker said she felt that interacting with the children helped her to get a better idea of what teaching children would be like.

“This was a great opportunity for me to play with the kids and get to know how they interact,” Walker said.

“It was a really great opportunity for me.”

Hanna Yeargan, 18-year-old Nursing major and member of Alpha Gamma Delta, said she had just as much fun playing with the students as they had.

“They’re really energetic and sweet,” Yeargan said. “Being able to play out here helps to relieve their stress from taking the tests and kind of gets their minds off of it. I love interacting with children.”

Yeargan said she’s been involved with Pike Liberal Arts’ after school program and visits the students at least once a week.

“Just being out here with them and seeing how they interact with each other is a lot of fun,” Yeargan said.

“We’re basically here just to help them out, play with them and observe them,” Smith said.

“For us, this is an opportunity to play with the kids and learn how to do the things that we’re about to be doing full time. The kids are motivated and are having a lot of fun.”