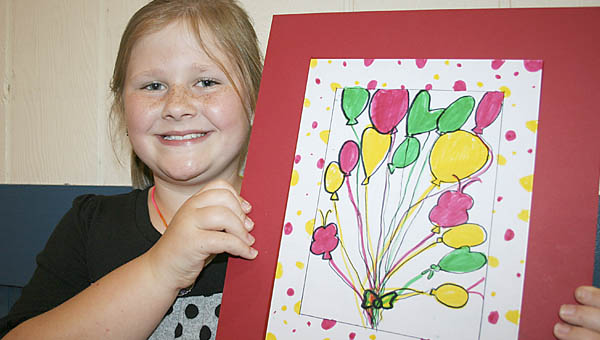 The artwork of an eight-year-old Pike Liberal Arts School student was selected from several hundred entries as the design for the 2011 TroyFest t-shirts.

Sarah Todd Floyd’s bright, happy balloon design will now be seen all around the county as the festive t-shirts spread the word about the annual TroyFest arts and crafts celebration on the square in downtown Troy on April 30 and May 1.

“We had entries from Pike Liberal Arts, Troy Elementary, Covenant Christian and Banks Schools,” Sanders said. “There were a lot of really fantastic designs but we could only select one for the t-shirt. Sarah Todd Floyd’s design just kept catching the eyes of the TroyFest committee.

Sarah Todd said she looks forward to TroyFest every year and she especially enjoys the kids’ corner where there are “all kinds of fun games and things to do.”

Winning the t-shirt design contest was very exciting for Sarah Todd and she is looking forward to seeing her colorful balloon design on t-shirts and especially to wearing one.

The t-shirt design competition has become a TroyFest tradition. It originated about seven years ago when the TroyFest committee decided to involve students in the designing the TroyFest t-shirts.

“There were a couple of reasons,” Sanders said. “One, was that we wanted to increase student interest in TroyFest and invite more participation because we have a large children’s area at TroyFest. The other reason was that students would bring fresh ideas and new attitudes to our little celebration.”

The TroyFest t-shirts are great advertisements for the annual arts and crafts celebration and are also a fundraiser for the event.