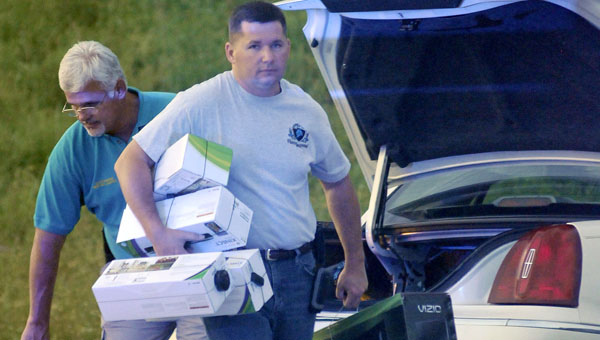 An investigator removes stolen property from a wrecked vehicle at the intersection of US 231 North and Kelly Road in Troy, Ala., Friday, April 8, 2011. The vehicle wrecked following a pursuit. (Messenger Staff Photo/Thomas Graning)

A car chase led to a massive manhunt Friday evening as law enforcement officers searched for a man suspected of stealing electronics from Wal-Mart.

More than six different law enforcement vehicles took part in the chase, including Troy Police; Pike County Sheriff’s Department; and the Alabama State Troopers, as well as a helicopter from the state troopers. At 8:30 p.m., the Ventress Corrections K-9 unit joined the search.

Sgt. Benny Scarbrough of the Troy Police Department said the incident began at approximately 6:10 p.m., when police received a call of a theft at Wal-Mart on U.S. 231, on the south side of Troy.

“That turned into a pursuit and, to make a long story short, the vehicle wrecked just north of Troy,” Scarbrough said.

The long story included a chase through Troy and the arrest of Deltrick Johnson, 21, of Montgomery, who somehow escaped the vehicle near the intersection of Park Street and Corman Avenues.

Scarbrough said the white 2001 Lincoln Towncar left Wal-Mart with a driver and Johnson as a passenger. It was headed north on U.S. 231 when Troy Police attempted to stop the vehicle.

“It was for investigative purposes to see if their vehicle had been involved with the theft,” Scarbrough said. “The vehicle failed to yield to police.”

The vehicle turned on to South Brundidge Street, heading into town, turned on to Cullman Avenue when Johnson jumped out and was apprehended shortly afterward by Troy police.

The driver headed north on U.S. 231 until the vehicle wrecked. “The driver fled on foot and police were on a foot pursuit.”

Scarbrough said he did not know the details of the theft, but investigators at the scene removed to flat-screen televisions and several Xbox Kinect consoles from the vehicle.

The Pike County Sheriff’s Department became involved after one of its patrol cars was hit by the white Lincoln Towncar.

As of press time, the Troy City Police and the Pike County deputies continued to search for the driver of the white 2001 Lincoln Towncar.