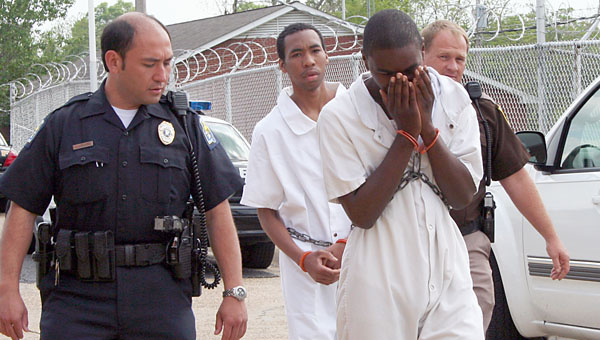 Law enforcement officers escort Troy McClaney and Brandon Ryals to the Pike County Courthouse for their preliminary hearing Friday afternoon. The suspects are two of four men charged with capital murder in the deaths of Mark Kelvin Adams and Carla Leaann Smilie, who were found shot to death this week in AdamsÕ Needmore residence. (Photo/Jaine Treadwell)

The four men who have been charged with the murders of Mark Kelvin Adams and Carla Leann Smilie were ordered held without bond Friday at the Pike County Courthouse.

John Contrel Foster, 20, of Troy; Troy Kentrell McClaney, 21, of Union Springs; Marquisse Rashad McClaney, 23, of Troy; and Brandon Jamal Ryles, 21, of Brundidge, were arrested at 11 p.m. Thursday and charged with two counts each of capital murder-robbery. The suspects went before District Judge William Hightower on Friday afternoon, where they petitioned for legal representation and were ordered held without bond in the Pike County Jail.

Police said Friday that robbery appears to have been a motive for the killings. “We know that robbery was a motive,” Sgt. Benny Scarbrough said. “I can tell you that we recovered the firearms that were used in the crime.”

Police responded to Adams’ residence on County Road 7741 near the Needmore community at approximately 7 p.m. Tuesday, where the bodies of Adams, 53, and Smilie, 22, were discovered in his residence. Both had been shot to death and were declared dead at the scene. The investigation is being conducted with the assistance of the Twelfth Judicial Circuit District Attorney’s Office, the Pike County Sheriff’s Department, the U.S. Marshals Service Gulf Coast Regional Fugitive Task Force, the Dale County Sheriff’s Office, the Ventress Corrections K-9 Unit and the Alabama Department of Forensic Science.

Police have not released any additional details about the crime. “I’m not going to comment any further because of the ongoing investigation,” Scarbrough said.

Eagles hold on to victory over Trinity