Eagles hold on to victory over Trinity 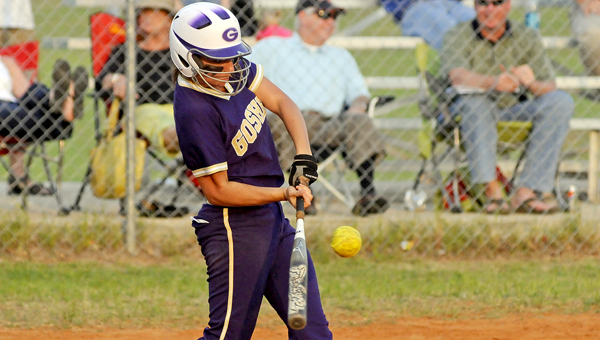 There have been few teams around the county as hot as the Goshen Eagles softball team, as of late.

After starting the season off with two consecutive losses, the team is purple and gold have evened out the ship – and then some.

Coming into Friday’s home game against Trinity, Goshen was 10-5, and winners of their last five games.

After the afternoon showdown, the Eagles can another ‘W’ to the win column, thanks to a 5-3 victory.

“We battled back,” assistant coach Amy Warrick said after the game.

“They never once got down on themselves and they battled back all the way through the game. This team has a lot of leadership – they never quit.”

It was not an easy win, as the coach pointed out.

The Eagles got off to an earl 1-0 lead thanks to a Niyoka Slater leadoff triple, which she would later score on thanks to a pass ball.

That lead would evaporate rather quickly in the top of the third.

Trinity would rally for three runs off of three hits and a walk in that inning off of Goshen starting pitcher, Ali Warrick.

The Eagles would not go down quietly.

In the bottom of the inning, Amanda Griggs would help chip away at that lead, thanks to an RBI single.

The big inning for Goshen came in the following inning.

With two outs already in the inning, Samantha Roy came to the plate, and swing at strike three, the ball however, got away from the Trinity catcher, allowing Roy to get to first base.

That would prove most costly, as Sidney Sullivan would hit a double in the next at-bat.

Haley Hayes would tie the game up with a single up the middle and Slater would give her team the lead in the following at-bat.

That would be all Warrick would need, as she shutdown the visiting team – throwing a complete game, allowing just six hits while striking out seven.

“I had to adjust to the strikeout zone, especially after the third inning.” Warrick said.

“We had to change the game play a little bit, but we did and we scored most of our runs after that. (Friday) was not one of my better games, but it was still a good game.”

The Eagles would get an insurance run in the sixth thanks to an Ashley Tarver RBI-triple.

“I think we do well under pressure, and that is really important,” Griggs said. “We all know how to come back in a game – that’s key.”

The win was the Eagles’ seventh in eight tries and it was the first time the team failed to score more than seven runs since a 4-0 win over Trinity back on March 26.

“We have a lot of confidence right now,” Griggs said.

“I think one thing that helps us is we do not like losing and we work well as a team. There is not one person that is leading the way, we all are. Everyone on this team has a great attitude.”

Slater finished 2-for-3 with a triple, a single, an RBI and two runs scored.

Hughes finished 2-for-3 as well, with two singles and an RBI.