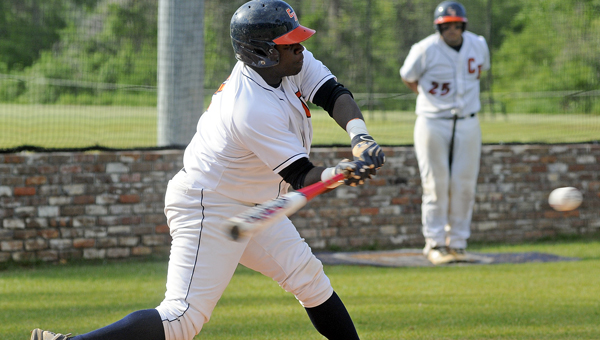 Thursday afternoon was a difficult one for the Charles Henderson Trojans baseball team.

While it was the visiting Rebels that handed the Trojans a 6-1 loss, the home team also had to deal with something far worse then any outcome of a baseball game – watching their teammate leave the game in a stretcher.

In the top of the fifth inning, a ball was hit to CHHS first baseman Harrison Reeves. And just like he had done hundred of times before, he went to field the ground ball and record the out.

However, thanks to a tricky bounce, the ball hit the senior directly in the face causing Reeves to go down to the ground immediately and halting play.

After several minutes on the ground, the Trojan would get up and leave the field under his own power. It was several minutes later, after being in the dugout, that an ambulance was called and Reeves was taken to the hospital in a stretcher.

Reeves would suffer a broken nose and some concussion like symptoms.

“I saw him take a pretty bad hop and it hit him in the face. As soon as he went down, there was a lot of blood. I was proud that he stood in there though and took one for the team – but I hate that he had to leave like that.”

As for the rest of the game, William Skipper, the Rebels’ starting pitcher, held the Trojans in check at the plate.

The lone run scored by CHHS came off a Blackmon home run in the sixth inning.

This was just the third time in the last 14 games that the Trojans did not score 10 or more runs and the first time since March 14 against Slocomb where the team in orange and blue only scored one run.

In the sixth, (Rehobeth) hit two balls that went off our guy’s gloves, tough plays, but if he makes those, we probably don’t give up runs. We can’t focus on the things we can’t control.”

The Trojans were trailing by the score of 3-1 going into the seventh inning, when the Rebels scored three runs to take a five-run lead.

Offensively, CHHS finished with more strikeouts than hits, six to four, and stranding six men on base.

“We got away from our strike zone awareness,” Irons said. “And against good pitchers you can’t do that.

“I really think that has been key to our offensive success – we kind of regressed a little (Thursday).”

“(The loses) are hard to take in,” Chase Connell said. “I feel like we could still see them in the playoffs – and beating them there would be that much sweeter. Most of us want to finish the season off strong and go deep in the playoffs. We are going to need some people to step up to do so.”