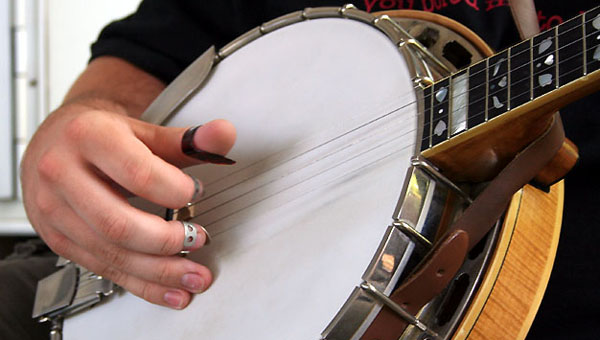 Rex Locklar's annual bluegrass festival is this weekend in Henderson.

Rex Locklar could be guilty of false advertising.

Then why has the Henderson Music Park been filled with pickers and grinners since early Wednesday while others are held at bay until today.

Bill Strickland of Clio said Rex’s signs mean nothing to those who are veteran pickers and grinners.

“We like to get an early start and once you get here, you don’t want to leave,” Strickland said. “The best picking so far was about eight o’clock Thursday morning but the best is yet to come. I’m here and I’m here to stay.”

At Thursday noon, already 53 RVs were on the grounds and by nightfall tonight there won’t be enough space to park a little red wagon.

Rex’s Bluegrass Festival is in its 45th year and every year, for the past 10 years, Locklar has said this is the last one. And, every year, those who come from nine states to the usually sleepy little community of Henderson, chuckle and shake their heads.

“This is where we want to be every April and October,” said J.C. Burgess of Chelsea. “Most of us have been coming for 10 years or more and we wouldn’t know what to do if we didn’t have Rex’s Bluegrass Festival to look forward to.”

Burgess plays a little “ge-tar” and a little harmonica but Thursday afternoon he was “just listening” with a big wide grin pushing back his ears.

“Out here, it’s music everywhere you go,” he said. “Under the canopies, the shade trees on the porch. Everywhere. There’ll be 30 or 40 groups jamming. If you don’t like it here, then, you can go over there.”

There’s a mix of professional pickers and beginners and those somewhere in between.

Roy Rodgers of Panama City has been “beginning” for about 10 years. He’s a member of a picking Panhandle group that includes a 17-year-old banjo picker who is better than good.

“Roy started bringing me along around 2009 and this is one of my favorite places to play,” said Matthew Jones, who is one of a growing number of young pickers at Rex’s.

Lucas said that it’s good to have young folks around.

“They make us sound good,” he said with a nod of satisfaction.

The pickers cocked their ears in the direction of the familiar sound of Dolly Parton.

“Jolene, Jolene, please don’t take him just because you can.”

The blond singer was Kellie Gerlach of Live Oak, Florida – a first-timer at Rex’s Bluegrass Festival.

“Ruth (Hagy) brought me,” Gerlach said. “She said this was the most fantastic festival. It was off the beaten path but it was a great festival. And, so far, it has been.”

Hagy smiled because she knew that Gerlach was in for a real treat once the weekend gets underway.

“I’ve been coming here for five years and this is one of my favorite festivals,” she said. Although there’s nothing pretentious about Rex’s Bluegrass Festival, it’s special because of the camaraderie. “Here we’re all family and no matter your musical skill, there’s a place for you.”

Lucas said it doesn’t matter how many bad notes a picker plays as long as they are played in time.

Locklar sat listen as bluegrass filtered through the trees and around the bends. He tried to keep back a smile that is a telltale sign that he, too, wouldn’t want to be anywhere else but the Henderson Music Park on the second weekend in April.

“Yeah, we really get things kicked off for the weekend but I can’t keep folks out,” he said, shaking his head. “They just come on in and get to picking and it’ll go ’til the wee hours. Everybody that likes to play bluegrass – gospel or country – or listen to it just ought to come on down.”

Admission to Rex’s Bluegrass Festival is $5 a day.