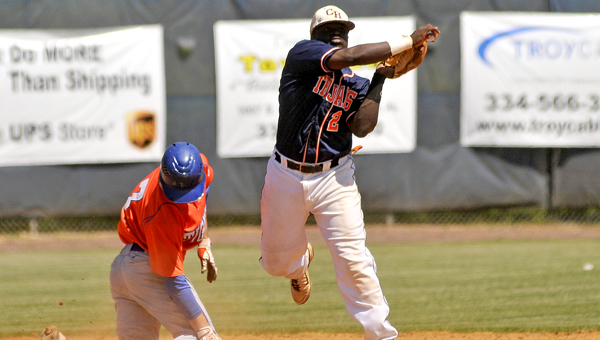 While there are still several weeks left in the baseball season, the Trojans of Charles Henderson found themselves in a ‘do or die’ situation.

Wednesday afternoon, the Trojans were in Rebel country, as the team traveled down to take on Rehobeth for the last area series of the season.

There, CHHS had to win to force a deciding game at Fraizer Field for the area championship, as the Rebels had yet to lose a game in area play.

However, when it was all said and done, it was Rehobeth who stayed perfect, as the team came from behind to win 13-12, clinching its first area title in several years.

Trailing 12-6 in the sixth inning, the Rebels scored six runs to take away both the lead and the game from the Trojans.

“I thought we did a great job at the plate. We were able to keep them in check defensively. We never gave up the big inning until the sixth – and that was the key. It’s OK to give up one or two but you when give up the big inning, you are in trouble. That turned out to be the difference in the game.”

The win improves the Rebels to 22-1 while the loss drops the Trojans to 16-9.

“We worked hard for six innings and didn’t finish. It is certainly discouraging, but it’s not a playoff loss – our season will continue.”

On the mound for the Trojans was their number one starter in senior Harrison Reeves.

The right-hander went five and third innings, striking out three.

After getting in trouble in the sixth inning, Reeves was replaced by fellow senior, Blake Hutchinson.

Hutchinson would pitch two thirds of an inning, striking out one, but was handed the loss.

Seniors Chase Connell and Tyler Dansby each finished 3-for-4, as Connell had an RBI and Dansby had six, four coming off a Grand Slam.

Still, those efforts were not enough, as CHHS will not be crowned area champions for the first time since Irons took over back in 2008.

“Every guy in the dug out felt like they could have done more,” the coach said.

“It’s frustrating because both our area games were ones that we could have won. I told the guys (after the game) that I was proud of their effort. I thought we competed every single pitch and they played hard. Rehobeth has lost just one game this year – they are a really good team. But we still hung in there with them until the end. We may have another crack at them in the playoffs.”

In both area losses the Trojans have suffered through this season, the team lost by a combined two runs whiling scored a combined 29.

“It’s the consistent defense that we have been looking for all season,” Irons said.

“It always seems like we have that one bad inning. We know that is something that we need to correct going forward to get ourselves ready to play for the post season.”

Both Rehobeth and CHHS will meet one last time in the regular season today, at Fraizer Field, with a first pitch at 4:30 p.m.

“I want to see the exact same thing we saw (Wednesday night) on Thursday,” Irons said, “and just make a few more plays.

“What’s encouraging is, we are so close to being a really good team. There are a handful of plays scattered out throughout the game that if we make any one of them, we win this game. We are close to being right where we want to be.”