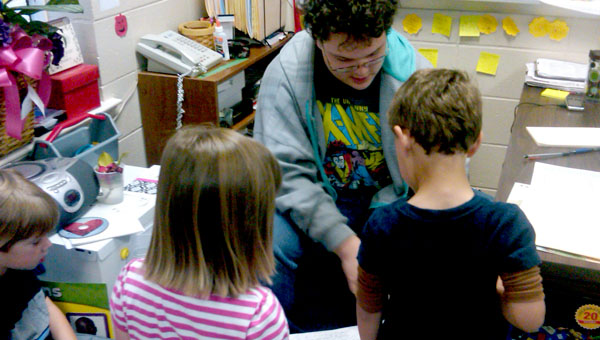 Battles, who is currently enrolled in the Graduate Counseling program at Troy University, is all too familiar with the struggles a parent may face when a child has been diagnosed with autism.

At the age of 9, Battles’ son Kade-Mica, was diagnosed with Asperger’s syndrome, which is a high-functioning form of autism.

“One of the things I have had to struggle with the most is to not look at my child like he is broken,” Battles said.

Battles said through her course work she has learned that she isn’t there to fix what’s wrong, instead she’s there to help work through various issues as they come.

“I don’t view autism as a disability,” Battles said. “I kind of view it like dyslexia. It’s just a different ‘learning style.’”

Battles said that, as a teacher, she has realized that all individuals learn differently.

“I’m a visual learner, while my daughters are auditory learners,” Battles said. “Kade’s learning style is different. There may be a day when you can show him how to do something and he does fine, while other days you may have to tell him what to do and, as long as he’s told in an orderly manner, he’ll be fine.”

According to Battles, dealing with the various complexities of autism is a day-to-day challenge.

Battles said that autism, like a rainbow, is on a spectrum.

The various forms of autism are considered “intense” or “less intense,” based on where they fall on the spectrum.

“Autism is a developmental issue,” Battles said. “It affects people in different forms in varying degrees, it affects a person’s ability to communicate and socially interact with others and it can range from a simple disassociation with an environment to people who have little to no spoken language and severe developmental delays.”

There are varying theories as to what causes autism, the most controversial of which is that it somehow stems from vaccines and immunizations.

Battles said she hopes to continue her work in raising awareness of autism and looks forward to any opportunity to help “get the word out.”

“Awareness, to me, is the only cure for autism,” Battles said. “I waited and waited patiently for someone to give me examples of how to behave and different things that I could do to help my child. I really wanted somebody to say, ‘you know, I know where you’re at, so let me help you through.’”

Battles said she strives to be there for the parents who may be searching for answers about how to better cope with an autistic child.

“If I can help somebody and give them a little help, then I’ll feel like I’ve accomplished something,” Battles said.

For any questions or for more information about autism and how to cope, please e-mail Karla Battles at kmbattles@yahoo.com

Will you sport a blue ribbon this month?