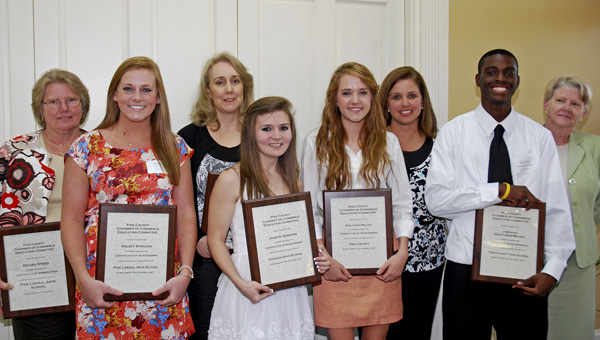 The school winners of the PRAISE scholarship also recognized the teachers who proved most influential in their high school careers. The students and their teachers included, from left, Dolisca Steed and Kelsey Starling from Pike Liberal Arts School; LaNell Schofield and Jamie Sessions from Goshen High School; Emily Melton and Michelle Armstrong from Charles Henderson High School; and JaShaun Hightower-Bryant and Alice Phillips from Pike County High School.

Emily Melton knew she had scored well when she made a 31 on her ACT test. She didn’t know until Wednesday just what that score would mean.

Melton, a Charles Henderson High School senior, received the Pike County Chamber of Commerce P.R.A.I.S.E. Scholarship, awarded to the senior with the highest ACT score in the county. “I didn’t know I had the highest until they announced it,” she said after the luncheon.

Melton’s key to success in taking the test? “Time management and process of elimination.”

Melton plans to attend the University of Alabama, where she will study marketing. “My dream job is to work in the marketing division at the Smithsonian (Museums),” she said.

The Program Recognizing Achievement in Secondary Education (P.R.A.I.S.E.) scholarship is awarded by the Chamber’s Education Committee. This year, funding for the scholarship came from the “Let’s Eat” program sponsored by the committee.

Ten area restaurants participated in the program, agreeing to donate a portion of one day’s proceeds to the scholarship fund in return for promotion and advertising of the event.

“Our initial goal was to fund a $1,000 scholarship and we were able to do that after our first three events,” said Dianna Lee, the education committee member who with along with fellow committee member Karen Herring spearheaded the “Let’s Eat” program.

Additional donations from the subsequent days helped the committee fund scholarships for each school winner and provided enough funding to raise the amount of the overall P.R.A.I.S.E. scholarship, Lee said.

“There are a lot of unsung heroes in this program,” she said, referencing and thanking the media partners who agreed to publicize the event through newspapers, websites, radio, cable TV and digital billboard.

Students also recognized the teachers who had the greatest impact on their academic careers: Michelle Armstrong at Charles Henderson; LaNell Schofield at Goshen; Alice Phillips at Pike County; and Dolisca Steed, who recently retired from PLAS.

“This is so important,” Phillips said in accepting her award.

“We teachers get vilified. We’re always the bad people. Thank you for all of this, for recognizing us.”

Hank Jones, a Chamber board member and former superintendent of Troy City Schools, conducted the ceremony and shared his congratulations to the students and the educators who influenced them.

“As a former teacher, former principal and former superintendent, I’ve had the opportunity over the last 30 years to see a lot of students come and go,” he said.

“It’s always good to see these students who have done extremely well … they’ll do well because they have been prepared and are taking care to prepare themselves.”