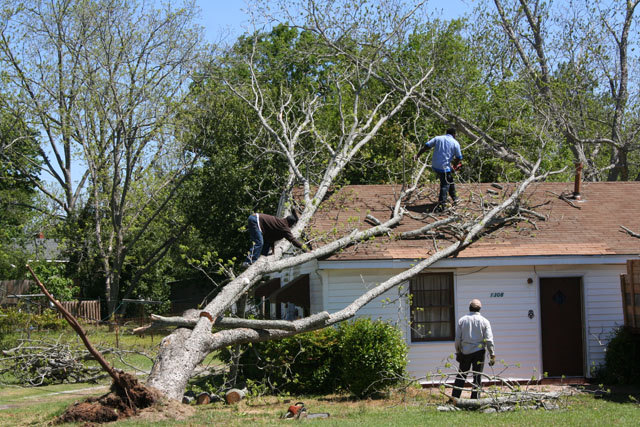 Crews work Tuesday to remove a tree from a house on Park Street.

A line of severe thunderstorms blew throughout the county at about 10 p.m., brining with it gusts of up to 65 mph. “We had straight-line wind damage reported across the county,” said Jeanna Barnes, EMA director.

“We had trees down on roads, on houses, on power lines,” she said.

However, officials had no reports of injuries related to the storms, which are blamed for eight deaths across the Southeast Monday night.

“We had eight to 10 reports of power outages,” said Sgt. Benny Scarbrough of the Troy Police Department. “We also had some (Tuesday) morning, when folks woke up and discovered their power was out.”

“At its peak, an estimated 4,300 SAEC members were without power,” she said. As of noon Tuesday, some 508 customers remained without power and more than 60 percent of those were in Pike County.

“We appreciate the patience our members have shown during this time,” said Max Davis, general manager of SAEC. “There are lots of limbs and debris around the system. We urge you to remain safe in your clean-up efforts. If you see a downed power line, assume that it is hot and call our office immediately.”

In addition to the power outages and downed lines, Scarbrough said the Troy Police received numerous calls of wind damage. “We had trees blown down on fences and houses, storm damage to a utility pole and the sign at Zaxby’s was blown down,” he said.

The Meeksville Volunteer Fire Department also responded to a brush fire on Shellhorn Road believed to be caused by a lighting strike.

“It was a bad storm,” she said, adding that 45 severe thunderstorm warnings and five tornado were issued by the National Weather Service as the line moved through the state.

The storms were blamed for nine deaths late Monday and early Tuesday.

An enormous tree limb that crashed through a Georgia family’s bedroom killed a father and the young son he was holding in his arms Tuesday as a fast-moving storm system pounded the South with tornadoes, hail and spectacular lightning. At least nine people were killed around the region, including several who died on roads made treacherous by downed trees and power lines.

Paramedics found the 4-year-old boy, Alix Bonhomme III, wrapped in the arms of his father, Alix Bonhomme Jr., in a sight so wrenching that even grizzled rescuers wept. Miraculously, a younger son in the bedroom wasn’t hurt, nor was Bonhomme’s fiancée, Marcie Moorer, who was sleeping in another room.

Moorer, who was still in pajamas hours later, said she still couldn’t fathom what happened when the storm rumbled through Jackson, a town about 45 miles south of Atlanta. Her 3-year-old son Iysic rode his tricycle around a relative’s front yard as she looked on.

“I’m still in shock. It hasn’t hit me yet,” said a bleary-eyed Moorer, who was planning to marry Bonhomme in July.

Later in the day, she added: “I’m just happy I have Iysic. That’s all I can think about.”

The storms were part of a system that cut a wide swath from the Mississippi River across the Southeast to Georgia and the Carolinas on Monday and early Tuesday. Drivers dodged debris during the morning commute in Atlanta, where one person was killed when a tree fell on his car.

The National Weather Service had confirmed at least six of the nearly two-dozen possible tornadoes it was investigating in several states, though the damage in Jackson was blamed on 60 mph winds that weren’t part of a twister. The system that also knocked out power to hundreds of thousands had moved over the Atlantic Ocean by late morning.

In Augusta, Ga., a practice round for the Masters golf tournament was delayed by 45 minutes while workers cleaned up debris. One of Augusta National Golf Club’s famed magnolia trees was destroyed by the storm.

In rural south Georgia, authorities said 45-year-old Christopher McNair was found dead under debris after a mobile home in Dodge County was ripped from its foundation by a tornado. Authorities say his body was thrown about 100 yards from the trailer, and three other people in the structure were injured.

A relative, Ricky McNair, described a desperate search for the man in an interview with WMAZ-TV.

“Oh my God, I was hollering at the top of my voice, hoping that he could hear me and hoping that I could hear him answer me,” McNair said, choking back tears. “And when I found him, I just, I just broke down.”

An unidentified Irwin County man was killed when a tree struck his home, according to emergency officials. And 56-year-old Ronnie Taylor, a Colquitt County road worker, was killed when he struck a large oak tree in the middle of the road as he was driving to work early Tuesday.

Memphis fire officials said an 87-year-old man found dead in his home Monday was electrocuted by a downed power line. In southern Mississippi, a 21-year-old man was killed when his car struck a tree that had fallen across a road, Copiah County coroner Ellis Stuart said.

The Georgia Department of Corrections said Robert Kincaid Jr., a state inmate being housed in the Colquitt County Prison, was killed Tuesday morning during storm cleanup when a tree fell on him.

Strong winds ripped off part of the roof of an Ashland City, Tenn. elementary school gymnasium, but officials said no children were injured. Seven people working at a plant in western Kentucky were injured Monday when a possible tornado hit, but dozens others were spared because they were on break at the time.

In Jackson, the mayor estimated it would take weeks — or longer — to clean the wreckage.