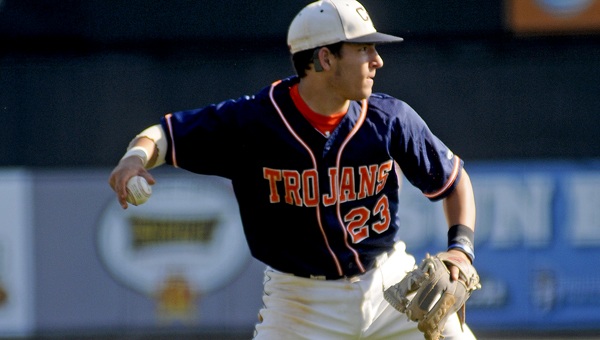 A little more than a month ago, the Charles Henderson Trojans were in a rut.

The team was losers of three-straight games for the first time in three seasons, and struggling to stay above .500 with its overall record.

There was much uncertainty, including whether CHHS would make it into the playoffs or not.

A mere three weeks later, one thing is for certain – the Trojans will be competing for another state championship this season in the second season.

On Friday night, CHHS finished off region rival Carroll in a three game sweep, improving its region record to 3-1. Meanwhile, Rehobeth also swept Eufaula, to help the Trojans move into second place and clinch the berth.

“It’s absolutely a sigh of relief, at least for me,” head coach Derek Irons said Monday.

“We have a chance now to compete for a state championship. There are only 32 teams (in 5A) to have a chance to keep playing. When you are a competitor, you just want another chance to compete and we know now that we will have that chance. That’s encouraging and gives us something else to really work for.”

Since that three-game losing streak, which took place back in the second weekend of March, the Trojans have gone 10-2.

What is even more impressive is how the team has won each of those games.

CHHS has scored double-digits in runs in each of the last 10 wins with the exception of just one. In the prior 12 games before the recent streak, the Trojans scored 10 or more runs just five times.

In the two most recent games, both on Saturday, CHHS beat Chilton County and Wicksburg, 16-6 and 13-3.

In the second game against No. 1 Wicksburg, in 2A, Connell had another big game, this time finishing 4-for-5 with six RBIs.

“We are doing a lot of things right offensively,” Irons said. “It’s the defensive side that hurts us.

“(Saturday’s game against Chilton County) was the most complete game we have played all season, until the seventh inning. We still don’t have that killer instinct to put people away. We are playing well, but there are always things to improve on.”

Since March 15, the Trojans have outscored its opponents 134-65.

“It is pretty impressive,” Irons said about the offensive production.

“We hit a stretch there early on where we struggled offensively. The hitting is the strength of this team, no question. That has contributed to the success the most – the ability to hit and to be good offensively. It has allowed us to overcome the times where we have lapses on the mound and defensively. We have the right approach.”