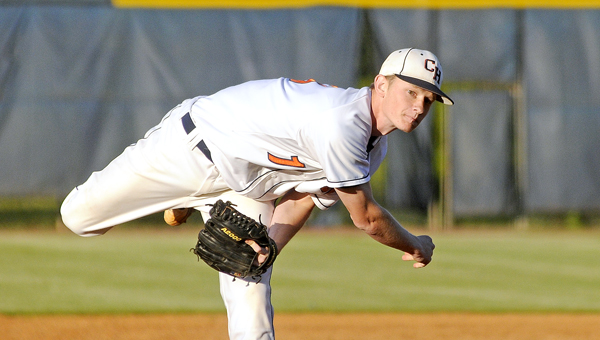 In the second region series of the season, the Charles Henderson Trojans found themselves in a similar position to where just a week ago.

Then, after beating Eufaula in the opening game of the series, the Trojans were gearing up for a double-header against the Tigers at home.

At Frazier Field, the two teams would split, with CHHS winning the third and final game, earning the tiebreak between the two.

On Friday night, the Trojans were looking to not let any slips up get in the way of sweeping past Carroll, thanks to a win, in Ozark, on Thursday.

Even though both games ended with a 10-run rule being called, Trojan head coach Derek Irons his team still lacks that cutthroat mentality, at times.

“We are still not there, no question,” Irons said.

“It might sound silly to say that when you have two games that were won by 10 runs, but it’s the process. It’s the attitude that once you get up, you put them away. In both those games, we went up big, but let them come back in it a little bit. It didn’t hurt us in terms of the outcome (Friday), but it will down the road.”

With the two victories, and a little help from Rehobeth, who swept Eufaula Friday night as well, the Trojans secured themselves a place in the playoffs thanks to its 3-1 record in region play.

“It’s a kind of the way things worked out this year,” Irons said

“It’s the No.1 goal of each season to get into the playoffs. We have done enough to secure that, and now that next focus is to be area champions. We are going to have that opportunity next week against a good Rehobeth team. But it’s good to know that we won’t have to deal with too much pressure because we know that we are in.”

As for Friday night’s games, it was the Trojans pair of Chase’s that helped lead the way for CHHS in game one, as Chase Connell and Chase Smartt combined to go 5-for-7 at the plate, for eight RBIs. Smartt finished 3-for-3, with a home run.

“Before the game, coach Irons told us how important it was to win both of (Friday night’s) games, so we went out there and played as hard as we could to get the wins.”

In game two, the Trojans put a seven spot on the board in the first inning, before going up 12-0 in the third.

The Eagles were able to chip away from that lead in the top of the fifth, scoring three runs off of Brantley LeCroy, before CHHS put the game away for good, when Jalin Lawson scored the final run on a pass ball.

“The only thing we could think about was getting a spot in the playoffs,” Lawson said.

“I think we are getting more and more focused as the season goes on. We need to finish teams off quicker then we have, but I think we will start to do that, when we get the opportunity.”

Lawson finished 3-for-3 with two RBIs, while Tripp Blackmon added a two run double in the bottom of the third.

The win was the Trojans’ fourth-straight and improved the team to 14-8 on the season.

“We are getting better,” Irons said.

“This was definitely a better played series (from last weekend). The defense and the pitching is not where we would like it to be, but it’s getting more reliable. These guys established a long time ago, it’s just a matter of will they do it consistently. I think we are growing up.”