Giving it ‘all I’ve got’ 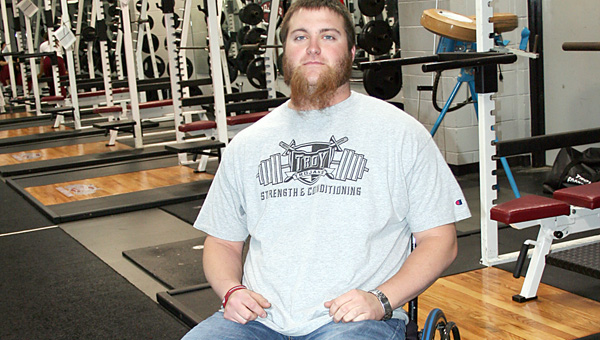 More than seven years after a car accident left him paralyzed, Jonah McWaters returning to the field of athletic competition. A former three-sport letterman at Pike Liberal Arts School, McWaters is now studying sports management at Troy University and training with Coach Bob Lambert to compete for a bid to the Paralympic Games in London. (Photo/Jaine Treadwell)

If Jonah McWaters could turn time back to January 23, 2004, and change his life from that day forward, he would not.

His car would still veer off the road into a ditch. He would again pull it back onto the roadway and experience the lightning flashing fear of the car careening back into the ditch and flipping and then the loss of memory of the impact that changed his life – forever.

Jonah’s parents, Wendell and Kate McWaters, were the first to know that Jonah would never walk again. The doctors had given them no hope of that. A broken back was the worst of his injuries and the one that he would carry with him the rest of his life.

Jonah was a senior at Pike Liberal Arts School when the accident happened near his home in Tarentum. He was a three-letter athlete – football, basketball and baseball. But baseball was his sport, the one he loved the most.

“Coach (Butch) Austin came to the hospital to see me and I said, ‘Coach, don’t give up my spot. I’ll be out there,’” Jonah said. “After Coach left, my mother was crying and she told me that ‘it’s not going to come back.’ The doctors had said that I wouldn’t walk again but I said that it wasn’t up to them. ‘It’s up to God.’”

In a split second Jonah’s life had changed but he knew that God was at work in his life and that something good would come of that tragic moment.

“Lying there in the hospital, I decided that if I wouldn’t walk again, I’d just have to deal with it,” he said. “I’d have to get up and go. Nothing to it. That’s what I’d do.”

Over the next weeks and months, Jonah was tested. The road he was on wasn’t an easy one. Sometimes “dealing with it” was more difficult than he thought but he never gave in to defeat and never stopped believing that something good could come from something so bad.

“It was rough for about two years, real rough and sometimes I got discouraged and really down,” he said. “But I kept believing that I could make it. I had to believe that.”

Now, seven years later and counting, Jonah said that accident is “the best thing that ever happened to me.”

“I’m so much closer to God now,” he said. “And what I’ve been through helps other people to know that they can make it through whatever life deals them. I’ve met tons of people that have been inspirations to me and there are so many good people in my life and good things happening.”

Jonah straightened a bit taller in his wheelchair and a wide smile spread across his face, “And, too, I wouldn’t have had a chance to be an Olympian if the accident had not happened.”

Jonah’s “chance” to compete in the Paralympic Games in London in 2012 kind of came through the back door. But he is certain that God placed people in his life who could make this chance happen.

Jonah’s love of animals promoted him to consider a career in veterinary medicine and Dr. Doug Hawkins gave him a job at his animal clinic in Troy.

“College was hard and it kicked … just kicked me,” Jonah said with a smile.

His love of athletics was the encouragement that Jonah needed to work out and the athletic training facility at Troy University provided him with the equipment to keep in shape.

Troy University track coach Bob Lambert noticed the young man in the wheelchair and realized his dedication to task and the potential that he possessed.

Lambert had coached Ken Marshall, another paraplegic, and he had won a silver medal in the javelin in the Paralympic Games.

“One day, I asked Jonah if he would like to get involved in athletics – maybe the shot put, the javelin or the discus and his smile told me what I wanted to know,” Lambert said.

Lambert began to work with Jonah and, what had not even been a thought for Jonah, became a dream – to be an Olympian – a Paralympian.

“The mechanics of the two are different,” Jonah said. “With the javelin, there more finesse with the discus, it’s more power. You can sling it.”

With Lambert coaching and coaxing him, Jonah practiced in such a way to be as perfect as he can be in his form and as physically fit as he can be.

In late March, he had a chance to see the result of all of the hard work and dedication when he competed in a collegiate meet, the Moorehouse Relays in Atlanta.

“I was nervous because I was competing against ‘normal’ guys, not paraplegics,” Jonah said. “But it was great to compete again and I beat two guys so I was pleased. We were pleased – Coach Lambert and me.”

Lambert said the Moorehouse Relays were a stepping-stone to the Dixie Games in Tampa in May and the Paralympic Nationals in Mirmar, Florida in mid-summer.

“Athletes have to qualify for the Paralympics in London and Jonah should qualify and he could have a shot at a medal in the discus depending on how he’s rated,” Lambert said.

Paraplegics are rate according to the degree of mobility they have.

Lambert said he is proud of Jonah and the commitment to excellence that he has made.

“Jonah has overcome a lot and his attitude is just awesome. He’s got a great outlook on life and is excited about the future and his opportunity to be an inspiration to others who are faced with physical challenges. He has a deep faith and there’s just not a better guy around.”

Lambert is hoping that the community will rally around Jonah in his quest for a spot on the 2012 U.S. Paralympic Team.

“It’s going to cost money and I believe that we’ll come together as a community in support of Jonah because he will be representing Troy and all of Pike County,” Lambert said.

Jonah is too busy holding up his end of the deal to be concerned about the finances of the venture.

“I’ve got to qualify first and to work every day to improve my chances when I get there,” he said. “God has made a way for me to do something really worthwhile and I’m going to give it all that I’ve got.”