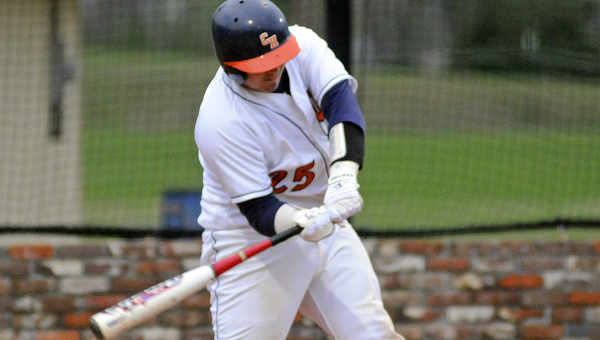 In the first game of a three-game series against Carroll, the Trojans of Charles Henderson went in looking to set the tone.

And that’s exactly what the team in orange and blue was able to do.

Thanks to a 9-4 victory in Ozark, the Trojans were not only able to improved to 12-8 overall, but also secured another coveted area win, going to 2-1.

Before the game, head coach Derek Irons talked to his team about always getting better, and when it was all said and done Thursday night, the coach said he saw his team taking the necessary steps to doing just that.

“Bottom line is, in area play, you have to get the win – and we did. Not only that, but we played better. We may not have played to the caliber we would have liked to see, but we did a lot of things better.”

Senior pitcher Harrison Reeves took the mound for the Trojans and did his best to help CHHS get a win.

The right-hander tossed a complete game, striking out one, while allowing three earned runs in seven innings.

At the plate, several players had multi-hit games, as Chase Connell and Chase Smart both finished 2-for-3, while Joey Denison and Tripp Blackmon had two hits and an RBI a piece.

“Harrison gave us another gusty performance on the mound and we fielded the ball well. The bats were still productive. Those things always give you a chance to win. We looked good, but there is always room for improvement.”

The Trojans were able to jump out to an 8-2 lead after two innings of play, but the Eagles were able to chip away that lead before CHHS was able to secure the victory.

“It’s got to take all 15 guys with a focus for all seven innings,” the coach said.

“One or two guys cannot do it alone, everyone has to help. Everyone has to be self-aware and realize the areas as a team to grow. We got out to a big lead, but we didn’t quite put it away like we needed to. We need to be able to keep the foot on the gas, so to speak.”

The Trojans and the Eagles will be back in action again today, this time in the friendly confines of Frazier Field.