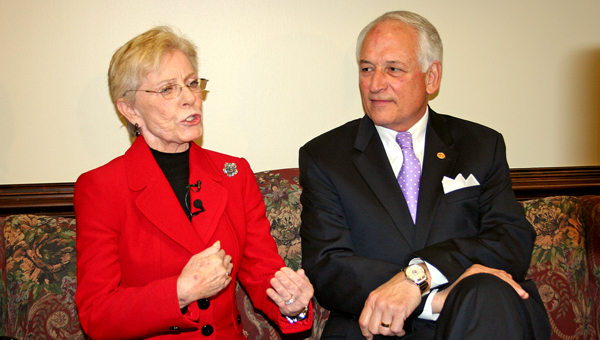 When Academy Award-winning actress and best selling author Patty Duke’s angry outburst was characterized as a manic episode, she responded with “Thank God.”

“Finally, it had a name,” Duke told a packed audience at the Claudia Crosby Theater Thursday morning. “For the first time, I had hope. And the doctor told me something even better. There was a treatment for it.

Duke delivered the 16th annual Helen Keller Lecture at Troy University and spoke openly and honestly about the mental illness that challenged her through much of her life.

She told how she used her acting skills to mask the symptoms of bipolar disorder. She told about alcohol use and promiscuity. She told about angry, destructive outbursts and the physical abuse she heaped upon her children. About her personal suffering from undiagnosed mental illness.

But she also told about the overcoming of suffering.

Duke quoted Helen Keller in saying that the world is full of suffering and it’s also full of the overcoming of it.

Duke was diagnosed with bipolar disorder in 1982 and she has been diligent in the administration of her treatments since that time.

“For almost 30 years now my life has been lived in balance,” she said. “My family has recovered and there has been forgiveness all around. My sons were so generous in the forgiving of their mom. So nurturing and love have taken their right places.”

And Duke has taken her right place.

She travels all across the country carrying the message of hope to those who are suffering from mental illness and their families.

“I want to shed light in the pockets of fear and erase the stigma of mental illness,” she said. “I want to carry the message far and wide.”

Duke’s connection to the Helen Keller Lecture was not limited to her longtime struggle with mental illness.

As a 12-year-old actress, she played Helen Keller in the 1962 movie “The Miracle Worker.” Twenty-years later, she played the role as Keller’s teacher, Annie Sullivan, in a made-for-television remake of the movie.

Duke told the lecture audience that she met Keller when she was 12 years old and Keller was 80.

“I felt as though I was standing in the presence of God,” she said. “There was a glow about Helen Keller that made you know, ‘It’s safe here.’ I don’t just remember Helen Keller; I can still feel her.”

Duke said that she once traveled to Japan where the people are in awe of Helen Keller and what she did for those with disabilities.

“When we arrived at the airport, there were thousands of people waiting,” she said. “My ego really enjoyed that but I realized that the people weren’t there for me. They were there for Helen Keller.”

For nearly 55 years, Duke said she has been blessed to bask in the wonderful life of Helen Keller.

“She was a beacon in my struggle with my own disability,” she said and added the bottom line is that “we are all survivors.”

Duke expressed appreciation to Troy University for allowing her the opportunity to carry the message of survival and hope to those who are struggling with physical and mental challenges.

“And, I’ve been blown away by Troy University,” she said. “I knew about the university but I didn’t know the scope of the educational opportunities here.” She mentioned the university’s rehabilitation counseling and interpreter training programs. “Now, I’m going to go across the country talking about Troy University.”