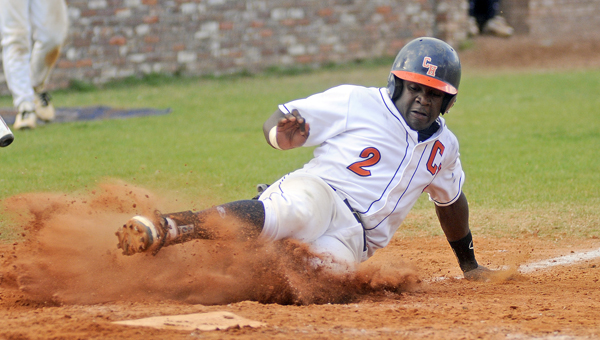 It’s been a back to basics kind of week at Frazier Field the last couple of days.

While the Charles Henderson Trojans may have gotten by area rival Eufaula, winning two of three games last week, it was not in a manner head coach Derek Irons would have liked to see.

In Saturday’s double-header split with the Tigers, the Trojans finished with 11 errors.

“Our defensive philosophy is to dominate the average play,” the coach said Wednesday night. “And we did not do that, at all.

It is those types of plays the Trojans spent a majority of this week working on, not only because of the team’s past performance in the field, but also in an effort to help build it’s confidence back up.

“Practice should bring confidence and hopefully that shows up,” Irons said.

“I think confidence is kind of a ‘what have you done for me lately’, thing. It has to be more of a steady thing, especially in baseball where there is so much failure. You have to be confident, even on the bad days and hopefully, we are maturing into those types of players.”

Up next for the Trojans is another area series, this time against the Eagles of Carroll.

Currently, the team from Ozark is just 3-16 on the season, winning once in its last 15 games.

That record is something that neither Irons or his players are concerned with going into the three-game set however, as the team is more concerned with doing what it has to do to be successful.

“It’s the task at hand, it’s this series right now,” the coach said, “and that is really what it should always be.

“In this case in particular, the only things that we should be concerned with are these three games and trusting the process a little better that will help us get the outcome we want.”

This week’s area series will follow the same format as last week, as CHHS will travel for the first game before playing host to a double-header the following day.

Right now, the Trojans are 1-1 in area play, and claim the tiebreak over Eufaula. The Eagles are 0-2, dropping its first area series to Rohobeth.

“I know Carroll is a little bit of an older team this year that has played some tough competition,” Irons said. “They are going to be a team that is going to compete and battle, especially at their place. Our area is the most competitive its been in years past. There are no push over games this year.

“Whatever we get, whatever we end up with, we are going to have earn,” the coach added.