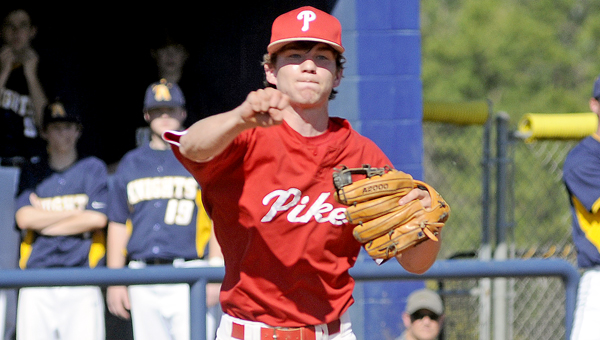 Not once in nine games this season, as the Pike Liberal Arts Patriots dropped a game at home this season.

Today, the No. 3 team in the latest AISA Sports Writer’s poll will look to continue to successful defend its home turf against Emmanuel Christian Academy.

Coming into the action at Butch Austin Field, the Warriors are 8-7 overall, just recently taking down Grace Christian Academy, out of Bainbridge, Ga., by the score of 8-7.

While head coach Butch Austin admitted to not knowing too much about the upcoming opponent, he does know who his starting pitcher for the contest is going to be, and it is one who will be make his debut.

On the mound for the first time this season will be sophomore Aaron Milner.

“We are going to go with Aaron,” Austin said. “I think he is ready to go.”

Even though this may be his first ever start on the varsity level, Milner said the nerves have yet to kick in.

“I think I am prepared for this one,” he said.

“I know (Emmanuel Christian) is a quality team. I have never played against them before, but I am going to out there and give it my best.”

One thing is for sure, if the offense around Milner continues to hit like it has, the sophomore’s outing should have a happy ending.

During the Patriots’ current four-game winning streak, PLAS has outscored it opponents 41-3.

After today’s game, PLAS will gear up for a double-header against Monroe Academy, who is currently ranked No. 4 in the state, with an overall record of 16-5.

The Volunteers are 6-1 in area play, while the Patriots are 5-0.

The double-header will begin at 3:30 p.m., Friday afternoon, at Butch Austin Field.