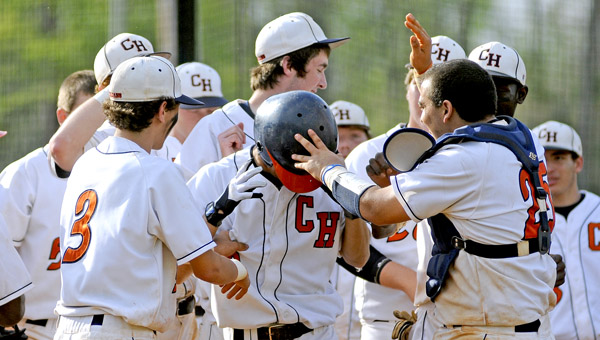 Even though the Trojans were able to come out on top of a three-game series with Eufaula, it was not because they made the game look easy.

It was actually the exact opposite.

In the area opening series, the Charles Henderson baseball team took game one in Eufaula Friday night, before heading into a double-header Saturday afternoon with the Tigers at Frazier Field. There, the team in orange in blue would go through a range of emotions thanks the play on the diamond.

In game one, the Trojans would fall 18-17, thanks to six errors, which led to eight Tigers runs.

The night capper would have a different ending despite a similar plot.

CHHS would finish on top, 14-5, despite another poor performance in the field, this time with five errors.

After the final out on the day, the Trojans head coach said he was very unimpressed with how his team performed in a crucial series.

“When you score 17 runs, you got to win,” Irons said, “we just played terribly on defense and on the mound.

“In this game, you have to be able to pitch, play defense and hit and we hit all day, but we didn’t pitch or play defense in game one. We were better in game two, but the freebies were killing us. You can’t be shocked with the outcome when the process is not very good. And that’s what happened in the first game, and that’s why we got beat. At least we were able to bounce back.”

The defensive woes of the first game overshadowed an offensive showcase by Trojan shortstop, Jalin Lawson.

The junior finished 4-for-4 with three home runs and eight RBIs against the Tigers, and in part kept CHHS in a position to win the game through all seven innings.

However, the Trojan pitching was not doing its part.

Tripp Blackmon, Houston Mabray and Brantley LeCroy combined to give up 15 hits and 18 runs, while walking seven and striking out just six.

Eufaula scored in every inning but the second.

The Tigers jumped to a 4-0 lead in the first inning, but the lead was matched by the Trojans in the bottom half of the inning, thanks to a three-run Lawson homer. In the second inning, again the Trojans put four runs on the scoreboard, with Lawson hitting another three-run homer.

That 8-4 CHHS lead would evaporate in the third and fourth innings when Eufaula scored two and six runs, respectively.

From there, the Tigers would hold on to the lead.

In the bottom of the seventh inning, a Michael Fox three-run home run would cut the lead to 18-17, however, the Trojans were unable to amass any more runs.

“There were probably 20 different plays over the course of the game, where if we make one of them, we win,” Irons said. “But it’s just incredibly frustrating when you know what to do but you don’t execute it.”

In game two, again the Trojans found themselves down early, trailing 2-0 until the third inning.

There Tyler Dansby would lead things off with his first home run of the season and help open the flood gates, as CHHS would score six runs in the inning. Chase Connell, Joey Denison, Chase Smartt and Harrison Reeves would all have RBIs in the inning.

CHHS would strike again in the bottom of the fifth inning, this time for five runs, as Lawson would drive in two runs with a triple.

The Trojans held a 12-3 lead at that point and would hold on for the win in the final two innings.

In the two games, Lawson went 8-for-9, with three home runs, three doubles, a triple and a single, as well as 12 RBIs.

“We got a once in a life time game from Jalin, and I am just so disappointed that we wasted that effort in game one,” the coach said. “Good hitters have those days and (Saturday) was that day for Jalin.”

With the Saturday split, the Trojans are now 11-8 on the season, with another big three-game series against area foe Carroll coming up this Thursday and Friday.

“We had to get the split,” Lawson said. “I knew (the second game) was a must win for us, and I knew these guys would come out and play hard.

“Right now, we are a young team. I think the more we play, the more we are going to learn. This is a great learning experience for us.”

In all, the Trojans scored 31 runs off of 34 hits Saturday afternoon, but it was the 11 total errors that had captured Irons’ attention.

“You can not play championship caliber baseball and make 11 errors. And that’s where we are as a team right now. We are a good team, but the question is are we going to float through the year being a good team, or are we going to step up and be a championship caliber team? That’s where we are. We have not answered the call. The good news is, there is still a lot of time left.”

On Thursday, the Trojans will head to Ozark to take on the Eagles, before playing host to another double-headed Friday afternoon at Frazier Field.