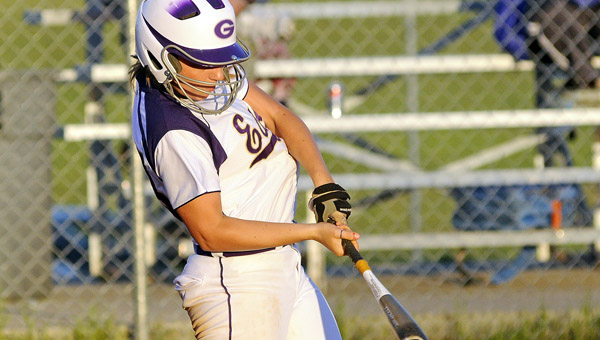 As the month of March draws closer and closer April, most teams around the area have played multiple games on their home turf.

Going into this week, the Goshen Eagles had still yet to play at home, as their schedule had the team traveling to schools like Ariton and G.W. Long.

All that was in the past however when the Eagles were finally the ones playing host to a team Thursday night.

And the team in purple and white celebrated its homecoming with a big win over Montgomery Catholic.

Thanks to an explosive outburst in the fifth inning, the Eagles flew to a 10-0 win in five innings and when it was all said and done, head coach Dee Hughes said it was good to be back home.

“I think we really started to turn the corner against G.W. Long,” the coach said.

“We started hitting the ball really well in that game and then to come home and play, it gave us the confidence we needed to play with defensively. Once we got the lead, we were not going to let go – this team was hunger for a win.”

The Eagles struck first in the bottom of the first inning when Shelby Jo Vinson brought home Amanda Griggs with an RBI single. Griggs reached third base two batters before. In the third inning, Goshen put a three-spot on the scoreboard, capitalizing off several Catholic errors as well as some solid hits.

One of those hits came off the bat of starting pitcher Alli Warrick, who had a two RBI single up the middle.

With a 4-0 lead, that would be all Warrick would need in the pitcher’s circle as the junior dominated, throwing a complete game and giving up just one hit while striking out seven.

“It’s good to be home,” Warrick said, “there was a lot more pressure to win at home, but I think the team responded well to that pressure.

“This was our seniors last first home game and this was for them. We got a good win, but we wouldn’t expect anything else at home.”

In the fifth inning, Goshen broke the game wide open, scoring six runs to finish off the game.

Every run scored in the game came with two outs in the inning.

“We put everything together (Thursday) to manufacture some runs,” Hughes said. “We have had a lot of young girls step up for us, which is always good to see.”