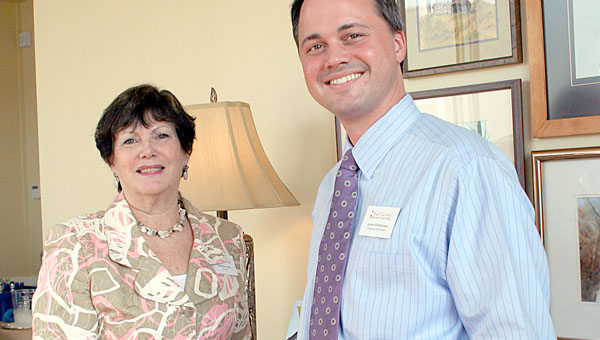 Kathy Sauer and Adam Drinkwater, president and board chairman of the Pike County Chamber of Commerce, were on hand to greet visitors as the Chamber hosted its an open house in its new downtown offices Tuesday afternoon.

The Pike County Chamber of Commerce hosted a grand opening and reception at its new location on East Church Street in downtown Troy Tuesday afternoon and a large number of Chamber members and interested citizens attended.

Many of those in attendance had an opportunity to meet and visit with Kathy Sauer, who came on board as Chamber president March 1.

Sauer said that she welcomes every opportunity to meet the people of the Pike County community and she wants them to know that the Chamber door is always open to them.

“These three weeks have given me great insight into the kind of community that Pike County is,” she said. “When we moved into the new Chamber office, we came with minimal furnishings. If we just mentioned a need, someone was there the next day to meet that need. I am so impressed by the community spirit that is so evident here.”

Although much of her time has been dedicated to the move and to getting a familiar with the Chamber operations and upcoming events around the county, Sauer said she has done some traveling around the county.

“I was already familiar with Pike County because I traveled back and forth from Enterprise through the area for years,” said Sauer, who was president of the Enterprise Chamber of Commerce for 15 years. “When I worked with the Family Service Center in Montgomery, I worked often with Mona Watson and the Pike Regional Child Advocacy Center here in Troy.”

Even though Sauer was familiar with Pike County, she still found things somewhat different than she had thought.

“Everything here is better,” she said, with a smile. “People have been very willing to talk about the strengths of the county and also honestly, but positively, about things that need to be improved.”

Sauer said the increase in population according to the 2010 U.S. census is a very positive selling point for Pike County. Growth is good for tourism. It’s good for local businesses and it’s a good recruiting tool for economic development.

“And, we have so many things that can be used to promote our community,” Sauer said. “We are a multi-cultural community with unique shops, a variety of festivals and cultural events and, of course, Troy University is the footprint of our county.”

Sauer said it is the Chamber’s purpose to move the county forward and one way to do that is by having a greater presence in the county and that is the aim of the Chamber under her leadership.