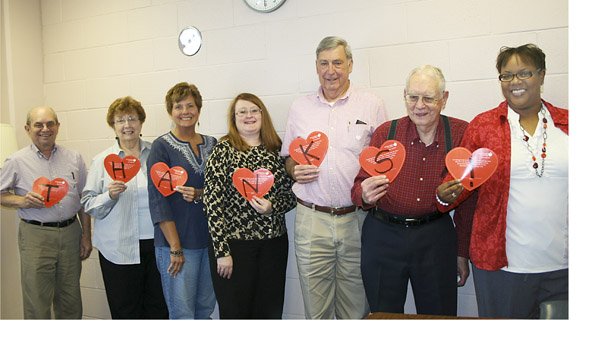 The Pike County Heart Walk board of directors took a few minutes Wednesday to say a special ‘thank you’ to all of those who helped make the 2011 Heart Walk fundraising campaign a great success. Pictured from left, Gene O’Masta, Mary Wadowick, Elizabeth Mitchell, Tracy Davis, Jack Norton, Jim O’Neal and Annette Toney.

The 2011 Pike County Heart Walk fundraising campaign raised $31,569.44-plus in support of the American Heart Association’s efforts to reduce the number of deaths caused by heart attack and stroke.

The Pike County Heart board met at Troy Regional Medical Center Wednesday to discuss the 2010 fundraising campaign and begin thinking about ways to continue to raise awareness about heart disease, which is the number one killer of Americans.

“Our fundraising campaign was very successful as the people of Pike County were, again, very generous in their giving,” said Annette Toney, board chair. “Our fundraising totals have been made available to the home office of the American Heart Association and they are also pleased. Even when we are experiencing times of hardship, people have given from their hearts.”

Twelve Heart Walk teams participated in the fundraising campaign. Through their efforts and the support and generosity of sponsorships and individual donations, the 2010 Pike County Heart Walk was a great success.

“Because times are hard, we didn’t set a goal for this year’s campaign,” Toney said. “Our hope was that people would give from the heart and $30,000 and counting lets us know that they did.”

Ann Gates won a one-year membership to the Troy Recreation Center. That membership was donated by the recreation center.

Five local restaurants chipped in on a meal card that included two meals at each of the participating restaurants, Monarcas, Half-Shell, Santa Fe, Mr. Ho’s and Sisters. Tim Eakes was the winner of the meals for two.

The Freckle Frog donated a necklace that was won by Rudy Rodriquez and Jason Ellis won the one-month workout at the Trinity Fitness Center.

“We want to thank our sponsors, team members, participating businesses and all of who supported the Pike County Heart Walk by purchasing tickets and making donations,” Toney said. “It took everyone working together to make this year’s Heart Walk campaign a success.”

Toney and the board congratulated four-year-old Eavie Kate Lindsey, a student at Mother’s Day Out at First Baptist Church of Troy, who designed the Heart Walk tee shirt.

Toney also thank the board of directors who worked so hard in the fundraising campaign and to raise awareness of the disease that takes the lives of more Americans than any other disease each year.