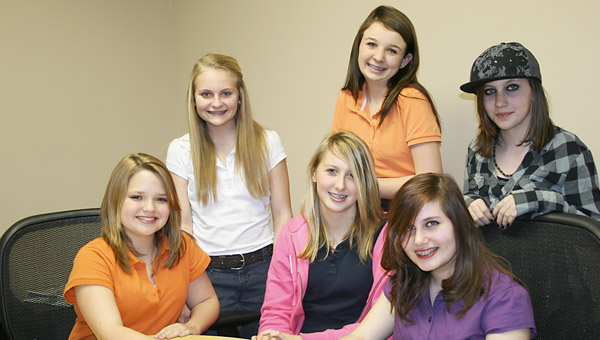 Niceness is priceless but, sadly, many people don’t know that.

So, a group of girls at Charles Henderson Middle School are spreading the word around school that a kindness is never wasted and that the truth is “words will harm you.”

“Words can hurt you really bad and, at school, people will say mean things to each other and it does hurt,” said Delaney Davenport, a member of God’s Great Gift Girls. “What we want to do is let people know that.”

God’s Great Gift Girls is a group of middle school girls who want to make a positive difference in the community in which they live and, especially, in the school where they spend many of their waking hours.

“Some people call it bullying when you are mean to someone but we just call in being mean,” Haley Jordan. “Just about every day somebody will say something that is mean and hateful to somebody and really hurt their feelings. We thought that it would be a good idea if we could find a way to stop people from doing that.”

The God’s Great Gift Girls talked among themselves about the things that are said that are hurtful and hard to forget. Then they put their heads together to find a way to stop the meanness.

“What we thought we could do was sell compliment cards,” Kacie Gibbons said. “The cards would have sayings on them like, ‘You’re Amazing’ and ‘Thanks for Being You.’ Things like that. Things that would make people feel better.”

The Girls opened their compliment shop Tuesday at CHMS and sold cards to those who also bought into their idea that “Niceness is Priceless.”

And, they were encouraged that other students were buying into their idea and hopes are that every day will be a better and brighter day because of the compliment cards that are carrying the simple messages and that little written pick-me-ups can brighten the spirits and lighten the load for those who are the target of meanness.

“We’ve got to stop being mean to each other,” Cassidy Oswald said. “Just smiling at someone can make their day. One of our cards says, ‘You put the kind in mankind’ and we hope that everyone will do that.”

All of the funds that are raised from the one-dollar compliment cards will be donated to the Pike County Relay for Life fundraising campaign.

“That way we can help in two ways,” said Morgan Vardaman.

Hannah Jordan said that the Girls also participate in other ways to help the community.

“We had a Prancing for Paws fundraiser for the humane society,” she said. “We like doing things to help other people and animals.

The Girls also sold Ryan Hammer CDs as a fundraiser for Relay for Life. Their total fundraising efforts to date are about $600 and hopes are to raise that total by leaps and bounds with the compliment card campaign.

The money will be nice but, if they can influence kids to be nice to each other, that will be the best thing of all, the Girls said.