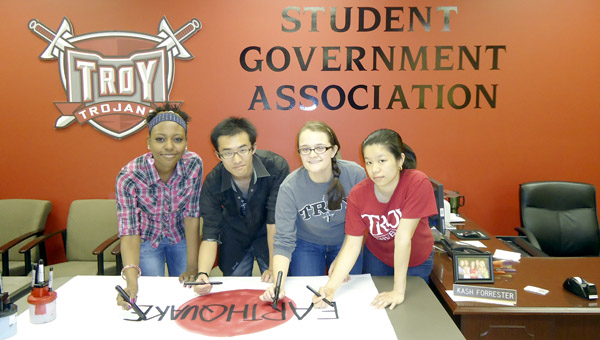 When Miki Kashiwa’s friend told her a 8.9 magnitude earthquake had hit her home country of Japan, the 21-year-old business major at Troy University didn’t belief her.

“When I heard from my friend that there was an 8.9 magnitude earthquake in Japan, I thought she was joking,” Kashiwa said. “How could anyone believe that that magnitude of earthquake hit my country? I just didn’t want to believe it.”

She searched for information:

“I was concerned for my relatives in Sendai and I didn’t even know that Tokyo was OK until I turned on the TV,” Kashiwa said. “Was my city OK, was my family OK? I needed information.”

She soon found reassuring news about Tokyo. . “My parents and little sister live there now,” Kashiwa said. “They are fine, their house is fine, but everything inside is just out of place. We should be happy that they have their lives.”

But Kashiwa, who also has relatives in the devastated Sendai region, said she initially feared some of her family may have died in the earthquake.

“We couldn’t get in touch with them for three days and found out Sunday morning that they are alive,” Kashiwa said. “I honestly thought they had died. If you’ve seen the pictures from Sendai, it’s hard to believe that someone still lives there.”

Kashiwa, at this point, said she just hopes that her family and her relatives at least receive the basic necessities: food, water, shelter and clothes.

The scenes in Japan inspired Kashiwa to jump into action from her home at Troy University.

Kashiwa said that she wasn’t sure what good she could do if she went back home to try and help, because other than her love and support, she said she didn’t have much to give.

But in Troy, she found an outlet. Today through Friday, at three locations on campus, Kashiwa is working with volunteers to raise funds for earthquake relief efforts.

Kashiwa said there are three locations on Troy University campus to donate money: in the Trojan Center, on the Troy University main quad and in the Dining Hall entrance (a.k.a. SAGA).

The table located in the Trojan Center, according to Kashiwa, will be run by the Troy University Art Club, where they will be selling t-shirts among other art-related items in efforts to bring in more money for Japanese relief efforts.

The donation tables will be open from 8 a.m. to 5 p.m., and all the proceeds will go directly to Japan Earthquake and Tsunami victims through the American Red Cross.

“I hope this fundraiser will help somebody financially, when they need money for something they may need to buy. I hope that this can help,” Kashiwa said.